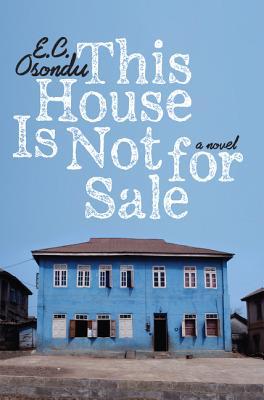 Grandpa and His Mystical House

An old house, a patriarch, and its numerous inhabitants with incredible pasts…

E.C. Osondu stamped his name as one of Nigeria’s finest contemporary writers with his debut book Voice of America (VOA), a short story collection which came out in 2010. It was in VOA that his Caine Prize-winning story Waiting and another shortlisted story Jimmy Carter’s Eyes appeared. The collection brimmed with people trying to live above the poverty line by any means: bank robbers, kidnappers, widows, corrupt policemen, prostitutes, and even an American vagabond living in Nigeria who turns out to be a Nollywood celebrity. So with an exciting first outing, readers would expect Osondu’s latest offer to be another scintillating read.

Osondu’s new novel’s title reminds any Nigerian of the popular statement written boldly on buildings to keep clear of confidence-men around the country: THIS HOUSE IS NOT FOR SALE, BEWARE OF 419. Though EC Osundu never mentions it anywhere in the book, it is obvious it is set in Lagos like in most of the stories in VOA. Just as most times one doesn’t know who is narrating, one only knows it is a child (or a group of children) narrating because of the underlying precocity and unreliability. The chapters – if they can be called chapters –have little or no connection between themselves, confirming EC Osundu’s inclination to the short form.

The first story or section of the book begins with a genealogical tale of origin, in a format common to the tradition of storytelling in Africa. When the children of the household ask their ‘Grandpa’ how the Family House came to be, Grandpa tells them a fantastic story that began a ‘long, long time ago’. Their ancestor, a respected juju man, dreamt he saw a crown on his head and felt the dream meant he would be a king soon. In that time there was an oppressive king who had the most beautiful girls presented to him first to have as wives; a king whose hunters presented him the choicest parts of their kill. The king, in an attempt to build something that would be regarded as his heritage, constructed a moat. But he faced opposition from Grandpa’s ancestors, a move that led to the king deciding to behead everyone who opposed him. However, when it got to Grandpa’s turn to lose his head, a millipede crawled out of that same head and the king decided to let him be. The ancestor, in appreciation, made an elixir for the king’s generation. In compensation, the king built him a home in the western tradition.

In the following story, Ndozo flees the Family House after being humiliated for stealing money from the sales box. Rumours surround her disappearance, including a curse Ndozo left, ‘that just as she had been put to shame that the house and its inhabitants would eventually be humiliated…’ Years later, Ndozo returns as a wealthy woman with an incredible story. She is intent on getting her son back but the members of the Family House refuse to give her back her son. She leaves disappointed.

Perhaps, of all the people mentioned in the novel, Gramophone, formerly known as Cash, is the most exciting. He is a man who long ago came to seek refuge in Family House after killing another man. In his past life, he had a provision shop that boomed but soon failed with the coming of Rotate, another shop owner who seemed to know one or two things about proper bookkeeping. A duel ensued between Rotate and Cash to see who would attract more customers to his own shop. They employed every known method, even slandering each other’s names. Now, living in the Family House, Gramophone is married to a girl who is given to him by Grandpa, a girl whose father owed Grandpa some money and was given in exchange of the debt.

Gabriel ‘the unluckiest person on earth’ now lives under the roof of the Family House after venturing into a series of unfavourable businesses, from planting tomatoes to felling trees. His lumbering business ended when the first tree, which his sawyer was felling, fell on the sawyer and buried him. He thinks that under the family, perhaps his misfortune will change  to luck but after a police raid and his arrest, he decides to leave the Family House since even under its roof, his unluckiness cannot be avoided.

There are a host of other people: Soja, ‘a corruption of the word soldier’ who leaves home for a training camp and returns with stories of his time away, one time working for the Environmental Task Force maltreating people and illegally confiscating people’s property; Fuebi, Soja’s daughter, whose mother rejoices to God when a rich man, Fide, makes passes at her and gives her large sums of money and, in due course, demands for sex. Things turn out to be good for Fuebi when she gets pregnant  by Fide and moves into his house.

The house later comes to an end: ‘The Ministry of Environment sent a notice that the Family House is sitting on a place that should have a major drain way’. One morning it is bulldozed, the event is observed by even soldiers and policemen because everyone knows it is not an ordinary house. Family House is a house where ‘all the things they said happened in that house … will make our ears tingle’.

Every character has a story of his own, typical Nigerian city’s stories, stories whose only connections are the Family House and Grandpa the patriarch. The characters come in a fizz in one chapter and then are never mentioned anywhere else.The stories of the characters are often didactic and ironic.Full of people fleeing, vanishing, and returning to the Family House. E.C. Osondu employs flashback technique to blend his characters’ complicated lives in such a way that their lives merged with the fortunes of the Family House, leaving them all memorable but with unsatisfying personal encounters.

Without intending to demean his book, I can say it works better as a collection of related short stories or as some sort of modernist novel told like an African fairy tale, of stories of people who lived in one big house at some point in time. There is no traceable plot. The book is something like an amalgam of Jennifer Egan’s A Visit to the Goon Squad and Chinua Achebe’s Anthills of the Savannah. Each person who arrived at the Family House seemed to have done so to seek salvation, a salvation they later realise not to be achievable.

Thematically, This House Is Not For Sale deals with most topical issues in contemporary Nigeria – prostitution, robbery, security (or lack of it), lack of infrastructure, corruption, kidnapping, political chicanery and other grim topics that populate the pages of daily newspapers in the country.

This House is not for Sale works better as a folktale rather than as a metaphor of contemporary Nigerian social and political history.There’s so much allusion to the Family House that at a point one feels it is another character, or rather the central character we seem to be missing, which isn’t entirely a bad thing. In reading the book, we experience a house full of mysterious people with mysterious stories. It becomes a representation of the complicated and fast life lived in the city, in this case, Lagos. Of all the people who have stayed in the Family House, Grandpa is obviously the most enlightened, the one who is portrayed as a flawless one. He is portrayed as a metaphysical being. He seems to have solutions to every problem, doling out advice to critical situations. Everyone else listens to him. But, who knows, whether this is because Grandpa is the Family House’s owner, whose attributes are reflected like a spectral mirror in the lives of the occupants of the Family House?

This book review was published in: Africa Book Link, Fall 2015