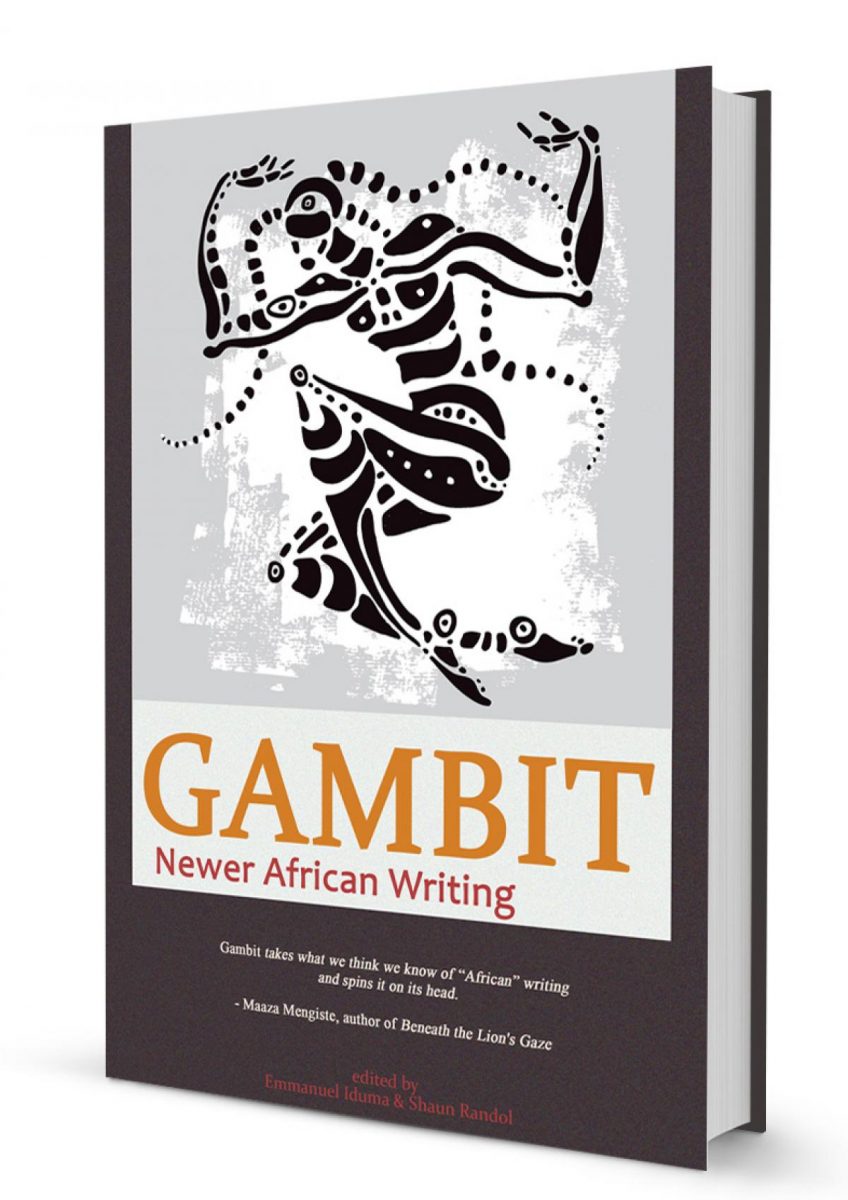 A Gambit is a first move in a game, mostly chess. And, this anthology of lovely stories is published as a first move, a trigger for writers and editors to publish more of its kind. A trigger also to show the literary world how beautiful Africa’s literature at its best could look like. In the introduction to their anthology, the editors Emmanuel Iduma and Shaun Randol put it like this:

Gambit aims to open up the conversation about what is (or is not) African writing, who or what African writers are and represent, and how this conversation can broaden the reader’s understanding of places and people so foreign to their own experiences. Further Gambit seeks to challenge the publishing  industry’s assumptions of quality African and world literature and to encourage similar publishing efforts elsewhere. (p. xii)

Gambit. Newer African Writing consists of nine short stories from young emerging African writers. This means ‘emerging’ from a Western literary point of view, because some of them do already have a certain reputation in their home country. And it’s exactly one of the aims of the editors of this anthology to bring these voices to the limelight.

Each short story is preceded by an interview with the writer. Usually this works out quite well: the interview helps in interpreting the story and vice versa. But, not so in this anthology. The short story that follows is never a topic of discussion in the preceding interview. As a reader, you are curious how the story fits within the author’s oeuvre, or in the literary canon of the author’s home country or region, or whatsoever. However, the interviews don’t give you any clues on this.

Yet, all the interviews are of great depth in understanding these writers and are very much worth a read. They touch upon the writers’ literary perspectives, their literary examples and preferences; upon the influence of the writer’s milieu on his or her work, upon the writer’s choice for fiction or poetry, upon the choice between writing novels or short stories, upon the use of the English language, upon the importance of (Western) recognition for an emerging African writer, etc. etc.

Every interview is followed by a short story. The nine wonderful stories in this book are written by: Abdul Adan (Somalia/Kenya), Ayobami Adebayo (Nigeria), Dami Najayi (Nigeria), Richard Ali (Nigeria), Abubakar Adam Ibrahim (Nigeria), Dango Mkandawire (Malawi), Donald Mlosi (Botswana), Navuyo Rosa Tshuma (Zimbambwe) and Susan Ushie (Nigeria). The book ends with brief notes about each of these authors. So, most writers, and also the interviewer Emmanuel Iduma , originate from Nigeria. Hence, as a reader, you learn a lot about the position of literature in that country, which was until late in the 1980s the purveyor of literature in Africa. You also learn, for instance, that after the generation Soyinka, Achebe and Clark, very little important poetry has been published from Nigeria. In contrast, the short story seems to flourish, in Nigeria and elsewhere in Africa. The Nigerian author Richard Ali makes the following, important remark on the state of African literature:

I foresee the rise of ideologies of Nigerian and Africa writing from this generation; we will leave ideas and factions and schisms – the whole works. And we will leave a mark. We are already making an impact, because for us the purpose of tradition is to aid us to be at the start of a new tradition. There are no foreign influences to overwhelm, for we have seen the harm of unoriginality and, I am hopeful, we largely value our creative authenticity. (p. 103)

Hence, Richard Ali touches here upon the central thought of this book: a new generation of African writers has come to the fore, who write from Africa, on Africa, from a local point of view, and for whom it’s not a primary concern to be acknowledged by the Western literary world.
In the interviews, most writers say they write in first instance from their belly, out of an urgency because the stories have been roaming in their head already for a long time. Or, they say that they just want to write beautiful stories. They acknowledge that recognition is important for a writer, but that in the process of writing, you don’t have to bother yourself with it. And, for them, the recognition afterwards might as well come from a local setting.

It’s exactly the intention of the editors of this book to give a voice to these emerging African writers and to give them the broader recognition they deserve, from a non-Western perspective, regardless of recognition from the Western literary quarters. And, they succeed keenly in this: the stories are clearly written, easily accessible, and have a firm plot structure and characterization.

Another characteristic of great literature is that universal themes like solitude, love, desire, loss, estrangement, racism, etc. are worked out in a subtle way. This is definitely the case regarding the stories in this book. For instance, what are we to make of the captivating story Talk to me by Dami Ajayi (Nigeria), in which a young couple is totally bored. They have completely lost interest in each other. Talk to me is an alarm cry from the man to his woman, who most of the time only talks to her Blackberry screen.
Also the young couple in Back to love by Donald Molosi (Botswana) is totally bored. She’s American, he’s originally from Botswana. They dine in a restaurant where the Vermeer painting in the entrance hall is as fake as the conversation among Americans in general, and between the two ‘lovers’ in particular. Thus, the setting of the restaurant is emblematic for American, and by extension, Western society: impressive on the outside, but artificial from within. At least, seen from the perspective of non-Westerners like Thera, the Motswana man. The conversations are superficial and lack empathy. The treatment of non-Western people is, in the best case friendly, in the worst case racist, but most of the time something in between.

Scratches on the soul

Particularly these two stories, but also others in this anthology, impose a great deal of uneasiness on the reader; they leave scratches on the soul, because they are so recognizable. Out of the stories looms an atmosphere of estrangement, disorientation, either within an (other) culture, or within a relationship. They fully do revive the ‘condition humaine’. But, as the Nigerian author Abubakar Adam Ibrahim explains, perhaps this must be the objective of every writer:

Essentially, I think the purpose of the writer is to cast light on the dark side of things – of feelings and thoughts and actions that define the way we live and the way we perceive things. I think the writer is the chronicler of the human experience against the backdrop of change, which in itself is constant. (p. 126)

Gambit. Newer African Writing confirms and demonstrates that Africa is full of young, creative writers, who are a real match for the established storytellers of the literary world, if ever we doubted this! And, one of the main intentions of the book was to give a podium to young, emerging African writers. By publishing these short stories for a wider audience, The Mantle Publishing, also an interesting online platform for world literature, has kicked off with a solid gambit. Mission accomplished, I would say!

This book review was published in: Africa Book Link, Summer 2015

This House Is Not For Sale – E.C. Osondu | A Review by Okwudili Nebeo...
Scroll to top