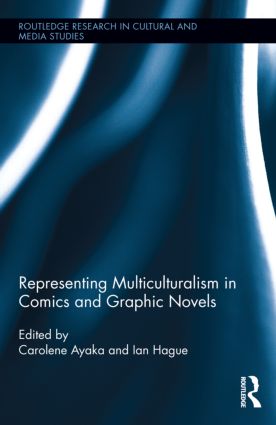 Understood as a visual medium that often combines imagery with text, usually in a sequential manner, comics are an art form perfectly predisposed towards conveying complex narrative structures.  Comics employ a wide variety of formats ranging from single panel editorial cartoons, to multi-panel comic strips, to comic book series, to Japanese manga and graphic novels, to perhaps the most recent iteration of the medium, webcomics.  Within these varied formats numerous strategies of representation may be encountered, lending a hybrid quality to the medium while also opening it to much debate.  The chief concern of this book is to examine how multiculturalism (itself a highly debatable term) is represented in comic arts.

Tellingly, the editors introduce this collection not by strictly defining the term ‘multiculturalism’ but by asking: ‘Is studying representations of multiculturalism in comics the same as producing multiculturalist comics scholarship?’ (p. 1).  Stemming from a 2012 Comics Forum conference, the pieces brought together in this volume constitute what might be described as an attempt towards a greater multicultural and cross-disciplinary dialogue on the representational possibilities of the medium.  Sites of cultural engagement include, very broadly: African American, Latino, East Asian American, South African, British, Spanish, Romanian, Israeli, Japanese, and Persian, amongst others.  Somewhat surprisingly, Lily Glasner’s chapter on an Israeli comic book argues for a multicultural discourse that includes children as a minority culture heretofore under-recognized as being oppressed by an adult majority culture (pp177-193).  Still, a tendency to lean towards North American and European comic arts prevails here: only one chapter out of the fifteen focuses on a specific African country’s comics (Andy Mason, The Presidential Penis: Questions of Race and Representation in South African Comic and Satirical Art, pp. 49-65).

In seeking to facilitate a wider examination of the structural forces that shape our concepts of culture as well as the visual and textual structures used to convey culture in comics, the editors chose to divide this volume into five distinct parts.  Part I, Histories and Contexts, consists of three essays dealing with the societal backgrounds of three specific developments in comic history.  Two of the essays deal with troubling depictions of black American and black South African subjects, respectively.  The first asks, can ‘counterculture’ act as an umbrella term under which harmful stereotyping and racial caricatures of black Americans may safely hide, or is there value in re-opening these wounds?  The second essay, written by a long-time cartoonist, points to the controversy behind caricaturing real-life political figures in post-apartheid South Africa, asking us to look for the historical structures that uphold racism before we shun all satire in the name of political-correctness.

Part II’s title, Depicting Difference, succinctly summarizes what it is that comics are so adept at doing by means of examining what Sarah D. Harris refers to as a ‘visual shorthand’ used to ‘zero in on racial and ethnic difference’ (p. 113).  The production of ideology by means of this visual shorthand is a common theme here, as it is utilized to both enforce and uphold depictions of difference. As Simon Grennan demonstrates, these depictions come to embody both the producers and the readers of comics (p. 69).  Mel Gibson’s chapter on using anthropomorphism as a visual tool for examining multicultural interactions in the human world is especially clear and brings a novel perspective to the topic of multiculturalism (pp. 83-89).

Part III, Monstrosity and Otherness, brings together three diverse analyses of depicting difference in comics, all of which point to the commodification of the depiction of the ‘Other’ as monstrous and its usefulness in societies.  The range of this section is notable, beginning with Sarah D. Harris’s discussion of Francisco de Goya’s ‘proto-comics’ (p. 114) alongside the modern Spanish comic The Masked Warrior.  Later, Ian Horton provides an Orwellian examination of colonialist stereotypes that have prevailed from British boys’ adventure comics of the early 20th century into present times, as well as an expected reference to Edward Said in regard to modern depictions of the hyper-sexualized Oriental. Jacob Birken concludes this section with a study on Japanese contemporary Shonen Manga.

Part IV, Challenging Assumptions, consists of two chapters dealing with comic books aimed at a juvenile audience.  The first takes the well-known and beloved Tintin series as its subject, arguing for the ‘indirect education’ (p. 163) that is possible when the series is translated into multiple languages and carefully edited for cultural clarity.  While stereotypical racial and ethnic depictions are acknowledged here, Maria-Sabina Daga Alexandru argues that Tintin ultimately asks its young readers to reexamine their own culturally received assumptions about others.  Lily Glasner’s chapter on an Israeli children’s comic has already been addressed here, and is included in this section of the book.

Finally, Part V, titled Case Studies, includes four chapters on comics and graphic novels that demonstrate the individual subject as locus of negotiation between seemingly fixed yet constantly shifting cultural identities.  It is in this section that I found one of the weaker reads of the entire volume, Emma Oki’s chapter on representing East Asian Americans (pp. 228-239).  While I appreciated the frequent explanation of key plot points and quotes from the characters in the graphic novels discussed, I found myself constantly asking “what, why, how?”  Put simply, what could have been a well crafted argument suffered for a lack of real demonstration.  Similarly, an earlier chapter on Latino identities in Love and Rockets (Ana Merino, pp. 34-48) also suffered a lack of clarity in argument and overcompensated with frequent plot exposition.  It should be mentioned that the latter was translated from the original, so perhaps something was lost in that process.

In the final chapter of the collection, Alex Link deftly compares Marjane Satrapi’s Persepolis and Taiyo Matsumoto’s Tekkon Kinkreet, arguing for the individual’s ability and right to articulate their local culture’s ‘collective identity without fixing that identity coercively’ within a globalized, mechanized structure (p.240).  While a modern Persian and not-too-distant future Japan seem to have little in common on the surface, this chapter reads as a clarion call for just that—the right and the necessity to express cultural difference.  Link ends: ‘the fact of devotion and commitment to keeping one’s cultural identity alive by activating it in the expression takes precedence over the positive content of that identity’ (p. 253).

In carefully arranging Representing Multiculturalism’s pieces into a structural dialogue with one another, the editors and contributors have managed to meaningfully add to an important and ongoing conversation within the young field of comics studies, if also inadvertently managing to further dislodge any definition of the term multiculturalism from my mind.  Out of all the chapters included in this volume, only one clearly attempted to define what multiculturalism actually meant for his study.  Jacob Birken’s Set Pieces: Cultural Appropriation and the Search for Contemporary Identities in Shonen Manga (pp. 146-159) refreshingly ‘suspend(s) “multiculturalism” as a paradigm for dealing with cultures in plural, and to retreat to a notion of  ‘culture, whose qualifying or quantifying prefix remains a potential’ (p.147).

By avoiding any hard definitions of such a term, the editors seem to have deliberately exposed the limitations inherent to any attempts to generalize or universalize notions of multiculturalism.  In studying a variety of representations of cultural difference in comics while analyzing both oppressive and liberating possibilities inherent to the art form, this collection succeeds in its project to ‘produce multiculturalist comics scholarship’ (p. 1).

This book review is published in: Africa Book Link, Fall 2015