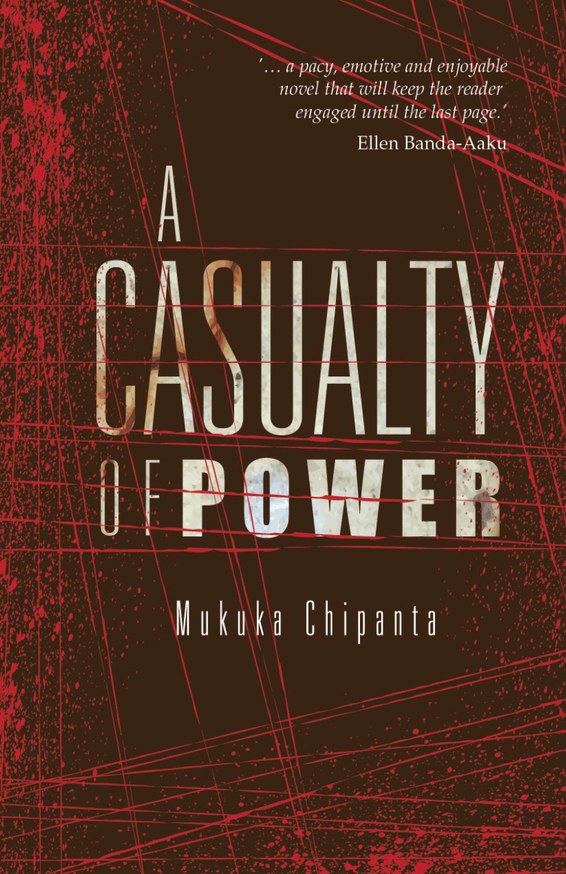 A Casualty of Power is set in Chipanta’s home country Zambia, between 2005 and 2012, and portrays a country in moral decay: corruption, greed, torture and treason rule over society. And, as in many other postcolonial African novels, it is especially ordinary people who suffer from these conditions. Therefore, the novel may leave the reader rather pessimistic, but it is a very gripping and well written story.

The protagonist of the novel, Hamoonga, a journalism student in Lusaka, gets involved with the rich businesswoman Lulu, with unexpected and, as it later appears, devastating consequences. It turns out that Lulu is forced to run errands for a high government official, Minister Zulu, and one evening,  Hamoonga witnesses her picking up a packet which has to be delivered in Johannesburg.

After the packet, presumably containing drugs, has been lost at Johannesburg airport, Lulu disappears to avoid repercussions. But Mr. Zulu and his allies assume a conspiracy between Lulu and Hamoonga and the latter is picked up and tortured to extort a confession. Although innocent, he has to spend several years in jail, which he eventually leaves as a broken man.

After his release, Hamoonga ends up working in a copper mine managed by Chinese. Working conditions in the mines are appalling and gradually, unrest develops with miners harassing supervisors and calling out slogans like ‘Zambia for Zambians’ and ‘Chinese leave the country’. The miners go on strike and in the negotiations with the Chinese mine leaders and the government, Hamoonga takes up the role of delegation leader. However, faced with associates of Minister Zulu, he realises that the so-called negotiations are a sham.

A former prison ‘friend’ of Hamoonga persuades him to take part in a meeting to discuss actions against local leaders and the government, but after the meeting a fire breaks out  and Hamoonga and his comrades are accused of starting the fire. Hamoonga is able to flee and, realising that his life is in danger, hopes to get away as far as possible.  On his flight, he is confronted by his earlier assailants and, consumed by feelings of pain, anger, loss and futility, he is unable to contain his rage and takes revenge

(…) for all the little people, for all those like him, all those who had suffered so egregiously at the hands of people like this man and those he worked for – these people and all they represented: power, greed, hegemony, and corruption. This was a statement he needed to make for all Africans. This was a statement for all ordinary African people tired of tyranny in all its forms, tired of lies, the empty promises and empty bellies, tired of propaganda and deception. (p.192)

Chipanta’s novel clearly stands in a rich tradition of African fiction in which ordinary people pay the price for the greed, the corruption and the malice of the powerful, the riches and the authorities. However, most of the works in this tradition hail from countries like Congo, Kenya, Nigeria or Zimbabwe where corruption and despotism were presumed, by most people, to be much worse than in Zambia.

Zambia, didn’t seem to fit into this picture up until now, certainly not the Zambia led by president Levy Mwanawasa, who during his legislature (2001-2008) tried to counter corruption excesses that occurred under the previous Chiluba government. Mwanawasa’s successor, Rupiah Banda, however dismantled much of the anticorruption effort put into place by his predecessor and from 2008 onwards, when Michael Sata started his presidency, the strain on democratization was even increased:

(…) the Sata government increasingly is using its powers for ill, South Africa’s Mail & Guardian recently reported: “Opposition leaders arrested, youth meetings banned, political rallies blocked by riot police, allegations of judicial interference and ministerial corruption, smear campaigns in government media and threats and lawsuits against journalists are not part of the image most people have of Zambia, supposedly one of Africa’s most peaceful democracies.” (Democracy is under challenge in Zambia, by Doung Bandow, on: Forbes.com, January 2013)

A Casualty of Power suggests that the described abuses, tortures and malevolences have really taken place in Zambia and probably continue to take place. In that sense one could read the book as an ultimate cry for justice and democracy in Zambia and the rest of Africa, which to my knowledge, makes it the first Zambian novel that underscores this important plea.

The book is mainly a plea from The Wretched of the Earth – to quote the seminal work of Frantz Fanon – depicted also in the works of Ngῦgῖ wa Thiong’o, Nuruddin Farah and Ousmane Sembene, to mention only a few.

But, contrary to these notable writers of engaged literature, Chipanta also delves deeply into the minds of the powerful, the oppressors, in that way humanizing these characters. Apart from the protagonist’s character, particularly the characters of Lulu, Mr. and Mrs. Zulu and of Jinan, Hamoonga’s Chinese supervisor in the copper mine, are depicted in a powerful manner. It particularly shows that they too have families, sorrows, misfortunes and that they are also – for a great part – victims of a corrupt, autocratic system.

The fact that the chapters are told from different perspectives – although mostly from that of Hamoonga – surely facilitates this effect. Chapter 12 for instance tells us about Jinan’s family and how he came to work in the Zambian copper mines:

It was now five years since Jinan had left to work in the Zambian copper mines. Over the years, he wrote Li Ming letters that would arrive about once a month. (…) In her letters she described how Tao was growing up fast, and wrote of conversations with their son in great detail. She talked about how Tao was asking more and more questions about his father ad when his father would return. (…) Every year she sent Jinan a picture of Tao and every year Jinan marvelled at how rapidly his son was growing up.(p.123,124)

The strength of A Casualty of Power is that it tells a revealing story, from different perspectives and in a well designed language. In plain sentences and phrases the author is able to create a characteristic atmosphere; an atmosphere of a country in disarray, yet with inhabitants like the brave Hamoonga who is willing to fight for justice and holds the dreams of a nation, just like copper does for Zambia:
To say that mining is the lifeblood of the country would be an understatement: it is the lifeblood, the heart, the liver, the kidneys, and the brain of Zambia. Life begins and ends with copper, the red gold, the chalice that holds the dreams of a nation. (p. 135-136)

A Casualty of Power is Mukuka Chipanta’s first novel. He is an aerospace engineer by profession and on his own website he writes that “building airplanes is much like crafting a story. Both require patiently weaving together a patchwork of ideas to hopefully create something of beauty”. With A Casualty of Power he has surely created something of beauty. I’m looking forward to his next creation.

This review was published in: Africa Book Link, Spring 2017

“This is Johussleburg and everyone here is suffering from affluenza” | A...
Scroll to top