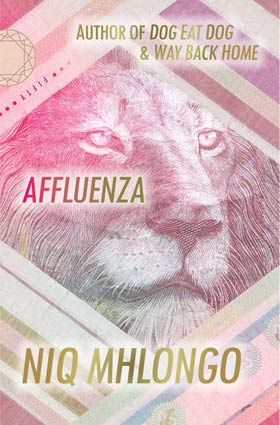 Niq Mhlongo’s recent collection of eleven arresting stories, Affluenza, is his fourth offering published by Kwela Books. The celebrated author of Dog Eat Dog (2004), After Tears (2007), and Way Back Home (2013), Mhlongo is known for his gritty take on the various maladies plaguing post-apartheid society. This comes to the fore most prominently in the titular story of the collection, an intoxicating study of the pathology of aspirant wealth. Mhlongo painstakingly catalogues his characters’ sartorial choices, their alcoholic poisons as well as the types of motorcars they drive. Remarking on the excesses of “Joburg people”, Fana – the protagonist of the story “Affluenza” – notes with a healthy serving of scorn that “Almost every black person pretends to be rich while staying in a rented room” (p.138). Yet, this contempt for others’ improvident habits soon turns inwards as he remembers, “Didn’t he just pay for the ladies’ expensive drinks with his credit card when he already skipped two instalments on his car? Who was he to judge?” (p.138)

Throughout the collection Mhlongo provides us with a cross-section of contemporary (and up and coming) middle class black South Africa. It is a study in the foibles and challenges of the newly minted black bourgeoisie and, as such, many of the stories’ ensemble of characters find themselves hanging in the balance, uncertain and at risk –  thus representing members of an aspirant culture, who in having gained a little, are haunted by the possibility that they now have something to lose. Scams, theft, accidents, and brutality seem to follow in the footsteps of money – where both haves and have nots seem to suffer the consequences that arise from the precarious divisions driven by the acquisition of wealth. Mhlongo is a social commentator, providing a new, raw voice to speak in unapologetic terms about this prickly territory. He extends an unflinching authorial gaze and, in the process, considers various unlikeable characters who lie (“The Baby Shower”), conceal (“Catching the Sun”), adulterate, impregnate and betray (see “My Name is Peaches”) and who deny paternity as a means of soothing a fragile male ego (“Goliwood Drama”). In “The Baby Shower”, a father and husband recounts how his wife after repeated miscarriages, steals a relative’s infant and passes the child off as her own. Grotesque accidents whether by train, car or beast, a farm invasion (“The Warning Sign”) and a criminal trial litter the collection. It indicates a society under siege – where bodily risk and death lurk across every page. In “Passport and Dreadlocks” – a story that considers belonging, identity, and the hustle for a better life – the character, Two-Boy, is brutally relieved of his passport as well as his dreadlocks. For him, it is a fait accompli that “People steal anything nowadays here in Jozi” (p.145). It is also a world in which sex and death are intimately connected, whether through foolishness (with its intimation of HIV in “The Dark End of the Street”), or unbridled desires, seen most clearly in the ending of “Affluenza”, where the promise of nubile flesh leads to imminent threat to life.

However, the overriding weakness of the collection is the unnecessary inclusion of twists and revelations at the end of many respective narrative arcs that read as gimmicky at best, and tawdry at worst. This overreliance on tragedy and spectacle cheapened the affective power of what otherwise would be a refreshingly unvarnished portrayal of contemporary South African society. The quieter, more nuanced stories with a subtler (anti-)climax work far better on the level of content and form. The weakest stories by far are “The Gumboot Dancer” and “Betrayal in the Wilderness”, for slightly different reasons. The dialogue in the former is completely unconvincing, too practiced where talking heads argue over tolerance and homophobia; whereas, the latter story’s leopard attack on a European tourist feels too obvious as part of some forced ecopolitical commentary.

The most compelling story in the collection, “Four Blocks Away”, is also its most understated. This is where Mhlongo’s merit as a writer shines. The story concerns a gumboot dancer on a cultural exchange programme in the United States who visits Washington DC on the eve of Barack Obama’s inauguration. After a talk and performance at Howard University, the protagonist meets up with a female friend named Siri. A night of beer drinking and marijuana smoking leads to the promise of sex, but Siri adamant that our gumboot dancer purchases condoms first, thereby expresses the following refrain, “No glove, no love” (p.40). No condoms can be found in the lobby, but the dancer is directed to a pharmacy four blocks away. Nothing deters the protagonist from this potential conquest, who summarily embarks barefoot in a bathrobe down the street with an “erection that projected ahead of [him] like a stolen rhino horn” (p.41). Funny and clever, delicately inscribing America’s problematic race relations into the plotline, the story works as compelling satire of both North America and South African societies. The humorous incongruity of a barefoot, bath-robed South African trying to convince a pair of American cops who stop him for supposed public indecency (but really, because he is an unfamiliar black man) to allow him to buys a pack of condoms outside the local CVS pharmacy four blocks down the road from the Hilton Hotel where a young blonde awaits him is delightfully narrated. Yet, despite this levity, the story’s account of the man’s willful and indomitable desire to reach climax is thwarted at the end, ending in anticlimax. It is this lack of consummation, the void, the dashed hopes, and frustrated sexual desire which gives the story its strength. The gumboot dancer’s quest for condoms in the middle of the night in deep winter in a foreign country, with a run in with the police, has all come to naught. In some ways, this sans-embellished emptiness, an affective void, speaks more clearly and forcefully to the collection’s title, than many of the more sensationally violent and brutal stories that accompany it in this complex and diverse volume.