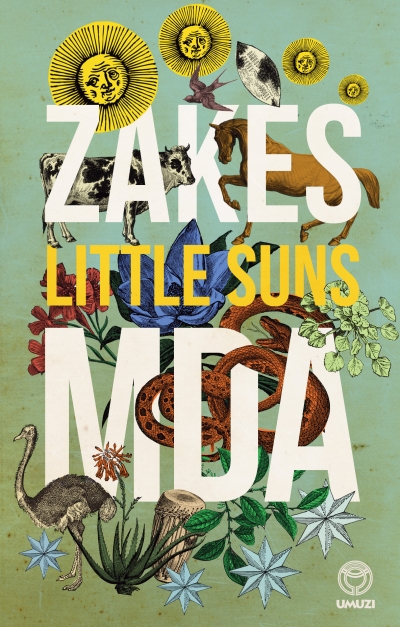 There were others before him. But we start with Malangana because that is where our story begins. (p.7)

The South African novelist, poet and playwright Zakes Mda, author of critically acclaimed novels like Ways of Dying and Heart of Redness, has published his tenth novel. Little Suns starts in the fashion of the oral storytelling tradition of praise poets who pass on the history of South African clans from generation to generation. The books intertwines the historical events of the murder on colonial magistrate Hamilton Hope at the end of the 19th century with the legends of the amaMpondomise, bolstering this historical novel with clan genealogy. The protagonist Malangana who is tasked to groom the horse of his brother king Mhlontlo is not more than a side note of history, a ‘little sun’ in the universe. However, his story provides us insight into the heroic resistance of his people against the colonial occupation. When magistrate Hope disrespects the amaMpondomise by, amongst others, forcing them to take up arms against Basotho rebels in the Basotho gun war of 1880 – 1881, he gets assassinated by Mhlontlo and his men, who subsequently go into exile in Lesotho.

Next to dealing with this episode in history, the novel tells Malangana’s personal story of what could not be. The encounter with the British in 1880 puts Malangana’s marriage with the bushmen girl Mthwakazi on hold, as he has to defend his people at the loss of leading his own life. While residing in exile, Malangana never stops thinking of what he missed out on. The events of 1880 are alternated with Malangana’s search of that time lost and pursuit of Mthwakazi in 1903: ‘He has returned to continue exactly where he left off. Except he cannot continue alone. Hence his quest.’ (p.9)

By jumping between 1880 and 1903, the book plays out the universal against the particular. As Malangana starts writing history by taking part in the struggle, the possibility of a love affair is wiped out, suggesting that being a hero conflicts with leading a personal life. Significantly enough, the book ends when the love story begins, signalling how the particular is never part of history. In that sense, Little Suns reflects upon traditional history, which, unlike the novel, is not concerned with singular stories. In short, Mda’s book balances historical events with what is not part of history.

Linking to this, the novel integrates aspects of many different genres. While the book relies heavily on names and dates, which gives it a sense of historical accuracy, it is interlaced with the magical, incorporated by means of legends, folk tales and songs. This is not surprising as, for the research for Little Suns, Mda combined historical records with the stories his relatives, descendants of the amaMpondomise, shared with him. By mixing the factual with the anecdotal, this novel reminds us of how blurry the boundaries between history and story truly are. In 1903, the assassination of Hope is just as true as Malangana’s compulsion to neigh like a horse and the existence of the folkloric Thunderman. Little Suns also signals the confidence sometimes placed in traditional beliefs like, for example, the mystical instinct umkhondo. Ergo, the book emphasizes that truth is relative and that there are many ways to recount the past.

The existence of conflicting stories shows most clearly in the theme of colonization. The book exhibits the derogatory discourse of the colonizers and tells of the reply of the amaMpondomise, who, when attacked in their traditions, kill Hope in a final bid for self-governance. This event has different meanings, as for one side it is a cruel act of violence, while for the other a symbol of last resistance. Little Suns suggests that the war for power is not only waged with weapons, but also with words, as the British are trying to claim the land by renaming it and, for example, the Senqu river becomes the Orange River. Significantly enough, the amaMpondomise try to uphold their pride with a mock trial against the British. Colonization is after all also about discourse, about the stories that live in the minds of the people. This is however a story of defeat for the amaMpondomise and they become more and more assimilated into the colonial system, eventually even on the level of the landscape they inhabit, as the British administration makes an attempt at ‘taming the landscape and making it more civilised by planting pine, gum and popular trees imported from the mother country’ (p.212).

In 1903, we see the effects of the British scramble for power. When Malangana returns from exile, the days of the kingdom of the amaMpondomise are over, and new people have come to live in the region and lord over its old inhabitants. The place has changed, but at the same time it is inevitably connected with its history. Similarly, Malangana may have become an old man, but he has not made peace with his past. Mthwakazi haunts him in his nightmares and the traumatic loss of the horse he used to groom has resulted in Malangana uncontrollably neighing like a horse. By going back and forth between 1880 and 1903, we are reminded that the past lives on in the present and that time is always compressed. In that sense, Little Suns is also concerned with present-day South Africa, which has become what it is because of its history. And if the country neighs, that has its reasons.

In summary, Little Suns is so much more than a historical novel. It is a book reflective of its own nature, balancing history with story and past with present. It is hybrid in genre, feeding historically accurate events with chunks of legends, folk tales and songs. As it jumps between 1880 and 1903, Mda’s book comprises romance and politics, the particular and the universal, the legend and the historical, the little suns and the big ones.

This book review was published in: Africa Book Link, Fall 2016

The Woman Next Door – Yewande Omotoso | A Review by Katharine Geldenh...
Scroll to top