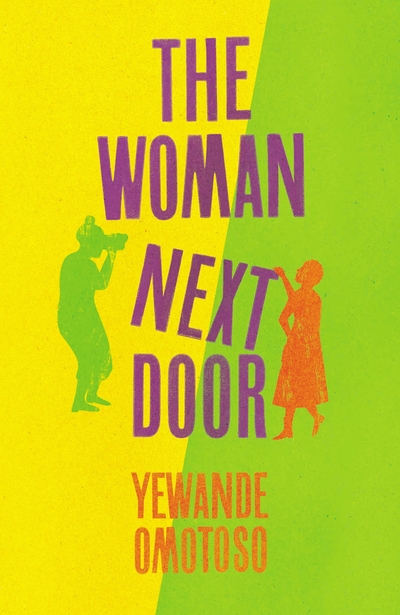 The Woman Next Door is Yewande Omotoso’s second novel. It follows five years after Bom Boy, for which she won the South African Literary Award for a First-time Published Author, as well as being short-listed for the South African Sunday Times Fiction Prize.

The launch for The Woman Next Door took place on a chilly evening early in May at Book Lovers in Melville, Johannesburg. The venue was packed, and at this cosy and intimate event, Omotoso was in conversation with Elinor Sisulu, author of Walter and Albertina Sisulu: In Our Lifetime (for which Sisulu won the 2003 Noma Award for Publishing in Africa).

Sisulu applauded Omotoso’s latest literary offering, reserving specific praise for the editing of the text, which speaks to Omotoso’s refined writing style. Omotoso pointed out that the manuscript underwent a number of re-writes and edits and expressed her belief in the importance of authors being open to constructive criticism. Sisulu heartily agreed with this opinion, noting it as an important part of the writing process which can only enhance the final literary product (and one which is sometimes unfortunately ignored).

The text is indeed technically easy to read with inter-twining story-lines that flow effortlessly despite the alternating perspectives of the protagonists and the shifts between past and present. The ease with which one reads this text, together with a judicious use of gentle humour, belies the challenging themes which Omotoso confronts in her narrative. A thought-provoking and effective juxtaposition between style and subject matter is thus produced.

The book jacket blurb begins with an apparently neat categorisation of the two protagonists: “Hortensia James and Marion Agostino are neighbours. One is black, one white.” As we journey through the stories of their lives, however, Omotoso skilfully unravels any associated pre-conceptions the reader may have.

Each of the elderly female protagonists is “the woman next door” for the other, and each woman embodies the “other” and a source of discomfort for her neighbour. Through their openly adversarial relationship, Omotoso tackles the fraught social issues of race, gender, ageing, financial and social privilege, and land ownership/re-distribution within the personal and personalised spaces of Hortensia and Marion. Indeed, as Kwanele Sosibo has noted:

“Omotoso’s training as an architect is evident in the book’s premise. Hortensia and Marion’s coldness is played out behind closed doors, so to speak. Their moments of introspection and their eventual attempts at redemption play out in the richly textured descriptions of their living spaces.”[1]

Both Hortensia and Marion have had successful careers during a time when most women were home-makers. Marion was an architect and Hortensia, a textile designer. They have achieved in industries which aim at the creation of beautiful and harmonious living spaces. Ironically, their successes in their respective industries are not echoed in their own home lives, despite the fact that both live in lovely houses in an exclusive Cape Town suburb. Disillusionment and disappointments in married and family life have saddened and embittered both.

During the book launch discussion, Omotoso expressed her unease with the human urge to pigeon-hole one another into pre-conceived categories. Omotoso herself, resists easy, neat categorisation. As the daughter of a Barbadian mother and Nigerian father, she was born in Barbados and raised in Nigeria, but has lived in South Africa since 1992. As such, she asserts her tendency to identify with the outsider/loner and pointed out her proclivity towards portraying such characters in her work.

She explored the eccentric loner, Leke Denton, in her debut novel, Bom Boy. As the son of a white mother and Nigerian father, he is raised by adoptive white parents in South Africa and struggles find his place within society. The experience of the outsider is considered in very different ways in The Woman Next Door, this time from divergent perspectives of Hortensia and Marion. Both elderly female protagonists endure the strain of being the outsider in various ways, and to different degrees, throughout their lives.

Hortensia is portrayed as the more obvious “outsider”, having been a poor Barbadian immigrant in England who marries an Englishman in the early 1950s, moves to Nigeria and finally settles, as an independently wealthy woman, in an exclusive (predominantly white) neighbourhood in Cape Town. In many ways, she is the more strongly-developed and successful of the two, although both Hortensia and Marion have had to withstand the disapproving attitudes towards determined and successful career women in the 1950s, ’60s and ’70s.

Marion is the daughter of poor Jewish exiles who strive to ignore their roots and work their way up in Cape Town society. Later in life, Marion is forced to confront her own racial prejudices, loss of social standing, and familial estrangement which comes with the associated senses of guilt, shame and alienation. Issues concerning marriage and motherhood are not romanticised, and the negative physical and social aspects of ageing are aptly portrayed.[2]

Omotoso develops Hortensia and Marion in ways which elicit the reader’s empathy with them whilst never allowing one to lose sight of the quite palpable flaws of both. The narrative is engaging and provocative without slipping into didactic moralising: the reader is left to make his/her own judgements. The whole is at turns humorous, exultant and heart-rending, and the ending avoids idealistic glibness by being both hopeful and realistic.

In my opinion, Yewande Omotoso achieves a rare feat with The Woman Next Door: a text worthy of scholarly attention which deals with contentious social issues, whilst still being an entertaining read.

[2] Omotoso is currently working on her third novel, tentatively titled Sleeping Not Dreaming, where she intends to scrutinise more closely society’s narrow conceptions of motherhood.

This book review was published in: Africa Book Link, Fall 2016