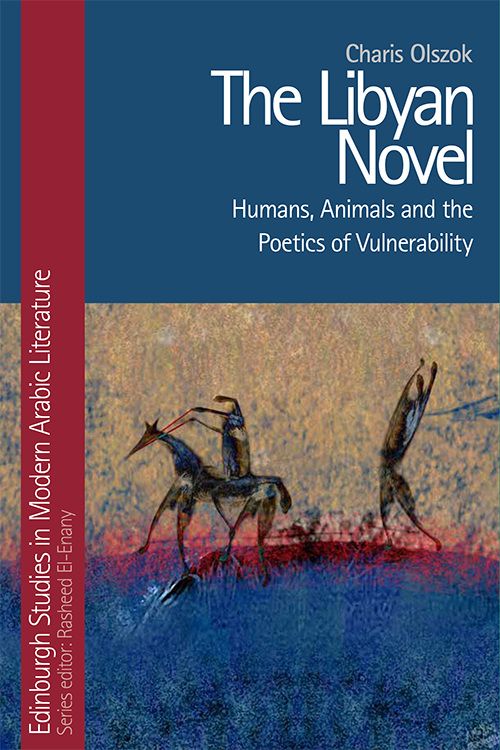 For many people, the Libyan novel – and the country it represents – is largely a terra incognita, a place where ancient cartographers masking their ignorance would have written ‘hic sunt leones’ (‘here … there are lions’). This is regrettable; Charis Olszok’s study is a most welcome and relevant addition in the field of literary studies.

A basic understanding of Libyan history, in modern times, is essential to grasp the essence of its novels. The country itself is a modern construct. After the collapse of the Ottoman empire, Italians established two colonies in North Africa that were subsequently united into one state. Italian colonial rule (1911-1943) was replaced by a British military administration (1943-1951), after which one single king, Idris al-Sanusi (1951-1969) sat on the throne of the independent kingdom of Libya. His rule was overthrown by a military coup which brought Libya’s most influential and notorious leader to power: Mu’ammar al-Qadhafi. From 1969 until 2011, when he was deposed and killed, he retained a firm grip on the country. His ideologies, dictatorship and ruthless methods to stay in power, combined with the oil boom and rapid urbanization, reshaped the landscape and brought profound change to the every-day lives of the people of Libya. Although there was a flicker of hope for a more open society after his downfall, rival governments, factions and militias soon filled the void, creating an even more chaotic and unpredictable environment. Young authors who now started to write openly about atrocities and trauma, were bullied online and faced death threats. It is in such difficult circumstances that Libya’s creative writers sought to express their concerns in ways carefully laid bare in Charis Olszok’s ‘The Libyan Novel. Humans, Animals and the Poetics of Vulnerability.’

This book is not an easy read but I highly recommend it because it is important and enjoyable.

First of all, as said, it fills a real gap. Even among academics specialized in Arabic literature, Libyan novels have remained largely under the radar.

Second, the focus on poetic vulnerability is a fortunate choice because it opens windows for a better understanding of the realities of the Libyan population. This is not a dry overview of authors and their works; through the stories of novelists like Al-Nayhum, al-Kuni, al-Faqih, al-Ghazal, Razan al-Maghrabi and others, the beauty and the horrors of the country come to life. Charis Olszok opens up multiple perspectives and her work illustrates how reading contemporary fiction can help create awareness, empathy and sympathy. Her book offers an intimate if sometimes gloomy portrayal of the precarious lives of the people of Libya, of tribals and city dwellers, Arabs and blacks, and their struggles with poverty, oppression, environmental hazards, neglect and other issues, as unfolded by its novelists. It tells us how a population was ‘othered’ within its own land – as second-class citizens under colonial rule, and labelled as ‘stray dogs’, ‘rats’ or ‘cockroaches’ by its dictator. It shows us la condition humaine et animale in a country full of suffering.

Third, it highlights ‘narrative fragility’ in a world dominated by censorship and brutal repression. The author unfolds how in al-Qadhafi’s Libya, any reference to contemporary issues was a no-go zone for creative writers. In the name of revolution, libraries and bookstores were emptied and books were burned. Authors were stigmatised as ‘enemies of the revolution’ and maltreated. The political conditions affected their lives and had an impact on their creations. They could simply not describe the present in realistic terms. In response, they turned to the past, and used fantasies, symbols and allusions to express their concerns. Expect a book with dramatic story lines, fables, metamorphoses, transformations, hybrids, the suffering of all creatures, man and animal …. The relevance of this book exceeds the regional level. It is a book about the challenges of authors who are fettered by the chains of a totalitarian regime, silenced and oppressed, an example of a literature driven to the margin (as the author eloquently expresses it). It tells us the story of writers, who, faced with ‘difficulty of story’, find a refuge in ‘allegorical darkness.’ This book shows us the effects of oppression, pollution, deprivation and other calamities of modern times.

Fourth, the book reads as a celebration of overlapping cultural heritages. In Libyan literature, sources of inspiration range from prehistoric rock art to Tripoli’s Girl and Gazelle statue, from Genesis to folk stories full of jinns, donkeys and wolves, from the tales of Classical Antiquity to the Qur’an, from Arabic classics to World literature. This is also true for the orientation of this study. These heritages do not appear as separate entities, but form a stream in which cultures interconnect and intersect. Libya’s novels thus seem to be embedded in a continuum of texts. The citations at the beginning of the chapters draw upon different cultural layers and include sources ranging from the Qur’ān (There is no nation that crawls on the face of the earth, no bird on the wing, but they are nations like you (…) to Ovid’s metamorphoses (Libya became a desert, the heat drying up her moisture. Then the nymphs with dishevelled hair wept bitterly for their lakes and fountains); from Kafka (There I sleep the sweet sleep of tranquillity, of satisfied desire, of achieved ambition: for I possess a house) to Santner (It is almost as if one were to ask whether Benjamin’s angel of history was capable of a good laugh amid all that wreckage piling up before his eyes). These lines invite the reader to ponder on what follows, to practice slow reading, to sit back and relish.

Fifth, there is the image of Libya itself. The cultural and intellectual awareness of the novelists forms a sharp contrast with the lawlessness and chaos which have befallen the country ‘like a black plague’, which shapes the way the country is perceived abroad. It is an antidote against stereotypes.

Sixth, this book is an excellent piece of scholarship. It approaches Libyan literature with modern methods and insights from the field of literary studies, Arabic and Islamic studies, ecocriticism, animal studies and other fields of interest. One will find references to Barthes and other specialized reading, original Arabic terms in transliteration, and many cross-references. The bibliography is solid. Primary sources have been used abundantly, in Arabic and other languages. Libyan literature is not confined to the Arabic language but authors expressing themselves in other tongues are included as well.

Finally, Charis Olszok is not only a scholar with a PhD in Arabic literature and a person with a vision, she is also a gifted translator whose mastery of the language shines through the pages of this book. The choice of words and imagery is bold at times. The beautiful, dense and pregnant style lends it literary quality. Titles and subtitles have been crafted with care and tickle our curiosity (Introduction: A country of others; Part I: Survival, 1. Animal Fable in Novels of Survival; 2. The Primordial Turn; Part II Signs and Cityscapes: 3. A God’s Wide Land: War, Melancholy and the Camel; 4. Absent Stories in the Urban Novel; Part III: Children of the land: 5. Too-Long-a-Tale; 6. ‘Une histoire de mouche’: the Libyan Novel in Other Voices; Afterword: Breaking fevers and strange metamorphoses).

A few highlights may illustrate what has been said above and give the reader a first impression. The book opens with ‘Umar al-Kiddi’s (1959-) story ‘The wonderful short life of the dog Ramadan’. In it, a Libyan rescue dog stands in the spotlight. A Dutch lady pays a fortune to make him leave the country as an illegal migrant crossing to Lampedusa. His story goes viral and he becomes the hero of animal rights’ activists and the object of a commercial circus; when he dies, he is honoured, in the Netherlands, with a state funeral. It is the invisibility of all but the fate of this dog – the blindness for the suffering of humans – that lends the story its power. Inadvertedly, my thoughts drifted here when I read about the airlift of a group of cats and dogs from a shelter in Afghanistan, during the last days of the chaotic exodus of foreign troops, in August 2021, when so many vulnerable Afghan allies and collaborators were left behind.

Beautiful too is to see the literary fantasies surrounding the iconic statue of the (nude) Girl and the Gazelle, which dates back to the times of Italian occupation and used to sit in a fountain on the Gazelle Roundabout in Tripoli. The selected texts show how a beloved monument grows into a literary motif, that, like, e.g., camels, horses and wildlife depicted in pre-Islamic Arabic poetry, undergoes transformations in ever changing stories. Having read the book one fully understands the shock that was felt, when in 2014 the nude statue was veiled, hit by a mortar shell which left a hole in the girl’s stomach, and finally went up into thin air (was she destroyed? hidden somewhere, to salvage her?). That same year Muhammad al-Na‘as (1991-) wrote a short story which was awarded the Khalifa al-Fakhri prize in 2015. Its title, Majnun Ghazala (‘the madman of Ghazala/ the gazelle’), is reminiscent of Majnun Leila, an old story about a man who loses his mind over his infatuation with a woman named Leila (this story too has manifold interpretations, some of which with mystic dimensions). In Majnun Ghazala the naked woman caressing the gazelle becomes the focal point of a police man’s obsession. Having come from a village, he resents the city dwellers and is disturbed by the condemning and lusting gazes she attracts. In the cracks of the bronze he sees her desire to escape; in the eyes of the gazelle he reads a cry for help. His dream is to save them. The author observes: They all passed her by: Italians; Italianised Libyans; Arabised Libyans; Africanised Libyans and Libyanised Libyans. Four-wheel drives sped by, and men with clubs, Kalashnikovs and heavy artillery. People wrote for her and against her, and jokes and anecdotes were spun around her. A Shaykh in a mosque called for her to be covered with a niqab. Another called for her to be destroyed. An intellectual wrote a poem about her, and another wrote a story. And so the Arabs continued to quarrel over their women (p. 230).

This is just a small sample of what to expect. Readers be warned: the Girl and the Gazelle may have disappeared from the roundabout, but she can still crush your heart while lamenting the fate of her people. The book may sketch a gloomy picture at times, but it shows, above all, the resilience of creativity and the relevance of literary works for the cohesion of a modern society.

This review was published in: Africa Book Link, Fall 2021