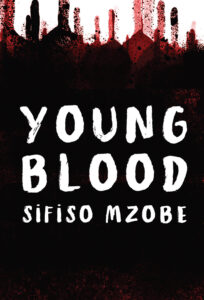 “I remember the year I turned seventeen as the year of stubborn seasons.” (7) So begins Sifiso Mzobe’s novel, Young Blood, which follows the turbulent coming-of-age of a young man, Sipho, over the course of one pivotal year in his life – the year that he is 17.

Describing the seasons as ‘stubborn’ because they did not quite follow the usual pattern, he attempts to explain how that year was different from all others. “Summer lasted well into autumn, and autumn annexed half of winter. It was hot in May and cold in November” (7). Weather is the least of his concerns, though; he is confronted, more pressingly, with the changes and choices that the inevitable cycles of life demand. Reaching a personal crossroads, as he unwittingly (perhaps naïvely) slides into the parallel reality of criminality and violence, Sipho considers the seasons of life that his father and his ancestors before him have weathered in order for them to reach a satisfying stage of maturity and contentment. To reach the next stage of his own maturity, Sipho must embark on a “troubled quest for identity” (Baldick 2008:35), which begins in this bildungsroman when he meets up with a childhood friend.

Musa has just returned to Durban from Johannesburg, ‘the City of Gold’, displaying signs of tantalizing new affluence: “His return from Johannesburg – dressed fresh in Versace, in a car considered the holy grail of BMWs in the township – was drenched in a glorious ‘I have made it’ glow” (15). The renewal of this friendship between Sipho and Musa, sets in motion a chain of events both exhilarating and terrifying and, in the telling of their tale, the novel explores the precarious lives of young men in urban contemporary South Africa. The juxtapositioning of these two characters allows for an examination of the various forces that can shape or sway young people as they develop: for example, the family unit and the community, positive and negative role models, education and sport, as well as spirituality or religion.

Sipho and Musa had become friends when they were boys. But despite being bright – “blessed with an absorbent brain” (34) – Musa has had little luck in life. His life contrasts in several important ways with Sipho’s. Sipho’s family is poor but both father and mother are present in his (and his younger sister’s) life, and they live together in a humble but orderly and loving home in the township. Musa, contrastingly, had come to live on the other side of the stream that separates the township from the ‘shantytown’ (an informal settlement called ‘Power’) with an ‘aunt’ (not, in fact, a blood-relative, but a friend of his late mother) and a number of other children, when he “lost both his parents to tuberculosis the year he turned ten” (33). In the kindly ‘aunt’s’ overcrowded household, Musa had grown up too quickly, then dropped out of school to leave Durban on a sudden whim: “I am going to Joburg. I hear things are better there” (35). He returns to Durban “a year and six months” (35) later, just as Sipho himself gives up on school.

Although Sipho, like Musa, also abandons his schooling, he is not cast adrift because he is ‘apprenticed’ to his father, a backyard (self-employed) mechanic. Sipho’s skills as a mechanic and as a driver would assure him a steady income. But those same skills become useful to Musa because, as becomes apparent when he returns to Durban, he is now a criminal involved with a sophisticated car-theft syndicate. Musa draws Sipho into the world of crime by using him – while paying him handsomely – to modify stolen cars, dismantle anti-theft devices, and to sometimes drive the getaway car on hijacking sprees. The lure of quick money and “the rapid upward social mobility that high-level criminal activity allows” (Wessels 2016:87) is too strong for Sipho to resist. Furthermore, the attractions of high-octane criminal life are understood in the novel as not only financially lucrative but, even more addictively, as a way of coming ‘fully alive’, albeit briefly. Infused with adrenalin, Mzobe’s detailed and exhilarating depictions of high-speed driving make plain the attractions of this car-focused, outlaw life:  whether it be at street ‘parties’ where drivers show off their skills – “drift, spin, do whatever. Bang your system to the maximum” (18) – or during terrifying rapid get-aways from hijackings and point-blank assassinations, or when simply cruising the highways and beachfront roads of the city.

Within months of Musa’s return to Durban, Sipho has succumbed to the dubious glamour of criminality and excess; and his life is on a downward spiral alongside his friend’s (who has already served jail time). But after facing several crisis points – such as the death of their fellow-thief, Vusi – and with the underlying foundation of love and support that his parents provide, Sipho is given the chance to turn his life around.

Because Sipho has the support of his immediate and extended family, he is able to benefit from their collective wisdom and experience. The importance of storytelling is foregrounded in Mzobe’s novel: Sipho is the recipient of experience and wisdom through the stories his father and uncles tell about themselves, about each other, and about their ancestors before them. But Musa does not have that benefit because he is fatherless, as are many of the young men in Sipho’s sphere: “Of the twelve houses in my street [he says], only two had father figures. Most of my friends in 2524 Close grew up without fathers” (64). However, for young men cast adrift in a country (and by extension, in a world,) where fathers are too often absent, Mzobe’s novel serves that same function: the function of ‘mentor’ to its readers; the novel serves the function of “time-binding”, which is the human process of transmitting the knowledge gained from experience, through the generations (Korzybski 1921).

Ultimately, and somewhat serendipitously, Sipho has the opportunity to turn away from crime – as his father had also done earlier in his life – and to, instead, turn to education and hard work as a more satisfying and meaningful way of life. This is what I most appreciated about this book, Mzobe’s ability to build the tension related to the fragility of the gangster’s hold on life, while simultaneously witnessing (through Sipho’s eyes) the beauty and sadness of ageing. In a scene near the end of the novel there is a tender moment when Sipho watches his father wash up after a day of hard work: “Maybe it was the shadows of the outside light on my father’s face. He was as meticulous as ever while he washed his hands, but that night I saw a frailty to his outline, a slowness to the whole process” (194). Whether Sipho chooses to ‘crash and burn’ or to, instead, slow down and live, is the question that draws the reader through the novel. At the end of “the year of stubborn seasons” (7), Sipho makes his choice.

Sifiso Mzobe is a South African author and journalist based in Durban, South Africa. Young Blood was his debut novel. First published in South Africa in 2010, the novel has garnered much love and accolade. It was the winner of the Herman Charles Bosman Prize for English Literature in 2011 and, in the same year, also won the Sunday Times Prize for Fiction, as well as the South African Literary Award (SALA) for First Time Published Author. Mzobe has since published a collection of short stories, Searching for Simphiwe (2020).

Charis Olszok, 2020: The Libyan Novel. Humans, Animals and the Poetics of Vulnerability...
Scroll to top