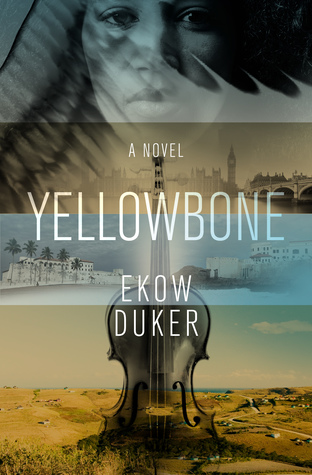 Two strangers from Mthatha (South Africa) cross paths in London when they become embroiled in a well-to-do family’s argument about an antique violin (a 300-year old family heirloom). Consequently, when the violin is stolen, both South Africans travel to Nsawam (Ghana) – one returning to an ancestral home, the other hoping for a sublime musical experience – where each is compelled to confront personal crises; while the fate of the violin affects the fate of all concerned.

Yellowbone (2019) is the story of those two strangers, Karabo Bentil and André Potgieter, as they endeavour to find a sense of belonging in the world. It is a novel in three parts: each part named after the city in which the action takes place as the narrative follows its protagonists from Mthatha in South Africa, to London in England, and then on to Nsawam in Ghana.

Neither Karabo nor André have ever experienced a sense of being ‘at home’ either in a body, in a family circle or community, or in their country of birth. Through these two characters – a light-skinned girl with questionable parentage, and an eccentric, gay musician who ‘sees things’ – and within the multiple contexts of South Africa, England, and Ghana in the 21st century, the novel explores what it means to be different, or to be ‘in-between’. André Potgieter is estranged from his English father and must escape his Afrikaner mother’s cloying protectiveness so that he can confront that which makes him special and unique: not only his musical talent, but his synaesthesia, too. (The psychological term ‘synaesthesia’ refers to the phenomenon of a secondary sensory experience that occurs in addition to the sense being stimulated. For example, the experience of words and letters having colours. In this fictional character’s case, hearing exquisite music enables him to ‘see’ angels.) Karabo Bentil, brought up in South Africa by her fiercely protective mother, feels a longing to go ‘home’ to Ghana, her father’s place of origin. Ultimately, although their juxtaposed (and increasingly entangled) journeys become ever-more chaotic, they each arrive at a moment of clarity, which provides a point of departure to their respective futures.

These are weighty issues. However, the novel does not take a heavy-handed approach, nor does it become bogged down in its subject matter. With its quick pacing and use of satire, the novel entertains first, and enlightens second. Ekow Duker’s Yellowbone has a delicate balance: a book with profound and timely themes presented in the entertaining form of a rollicking crime-thriller, adventure-story, and quest narrative. The plot constantly prompts the reader to ask ‘what next?’, while simultaneously initiating serious thought about identity, gender roles, education, and im/migration. Identity is explored in terms of physical appearance, family lineage, cultural heritage, and nationality. Women characters challenge restricting gender roles, and the ever-present threat of sexual abuse. The role of education and the effects that knowledge have on an individual’s self-esteem and prospects is questioned; while the African migrant experience, within the continent and in Europe, is foregrounded.

The three parts of the book – Mthatha, London, Nsawam – are presented as instalments, each with a distinct tone that reflects the gradual emancipation of the protagonists:

We first encounter Karabo and André in Mthatha, although the two characters do not know each other at this stage (they meet for the first time in London much later in the narrative). In this section, in chapters that focus alternately on Karabo and then on André in turn, the atmosphere for each of them is claustrophobic.

Karabo Bentil adores her father, Kojo, a mathematics teacher. She is the ‘yellowbone’ of the novel’s title, a term used to refer to her light complexion. Her appearance earns her either favour or disdain, but seldom indifference from local society. And Karabo’s skin-tone is all the more noteworthy because it is not only lighter than that of her mother, Precious, but is in sharp contrast to that of Kojo, her father.

For Karabo, herself, this contrast in skin colour is a curiosity only, especially when her Ghanaian grandparents come to visit and she marvels at her grandfather’s dark skin; but for others her appearance is a matter for suspicion. Although Karabo has a light-skinned mother, some suspect that a local white farmer is, in fact, her biological father, and not the dark-skinned Kojo. Kojo’s own mother exclaims, “ ‘Karabo is lighter than a mulatto. In fact she is practically white!’ ” (12); she doubts her son’s paternity: “ ‘There are tests, Kojo! You can settle this thing once and for all’ ” (14). The first time that Karabo hears the term ‘yellowbone’ directed at her is when she encounters a group of teenaged boys as she accompanies her mother on a visit to a shaman/mystic. When she rebuffs one boy’s advances, he verbally attacks Karabo, spitting the word at her face. She notices the ambiguity in his reaction to her appearance, however: “[he] was no different to most black men she met. They grovelled at her light complexion, marked her down for a plaything, an exotic prize. […] But now [his] fascination had curdled and turned to revulsion. Or perhaps he was just as afraid of her as she was of him” (53).

André Potgieter, too, has ambiguous pangs regarding his cultural identity. His mother is an Afrikaner, his father an Englishman; but he is estranged from his father, who cannot accept a gay man as his son, nor entertain André’s gift of synaesthesia and his sensory ability to see more than the average man. Furthermore, André’s mother denounces his English heritage: she “had a factory-set resentment towards the English. It was like she forgot her son was half-English” (37). André, despite (or, perhaps, because of) this double-rejection of his English-ness, feels compelled to go to England.

In London, both Karabo and André experience a surprising sense of longing for the place they each felt compelled to leave – Mthatha – and, with the double perspective of the im/migrant, they see their former home through fresh eyes and acquire a heightened sense of their own identity.

Karabo, who is in London to study architecture on a scholarship, falls in love with a well-to-do young, Englishman, Nigel Summerscales (who, it later transpires, is one of André Potgieter’s music students). When Nigel initially takes her home to meet his mother, Karabo senses that Mrs Summerscales “merely tolerate[s] her” (167). Here, the novel satirically depicts a bigoted and privileged ‘old-money’ family (the Summerscales) falling on hard times but desperate to keep up ‘appearances’. Later, Karabo is shocked by the woman’s “red-toothed hostility”, realising that the “snide remarks Mrs Summerscales had made the first day they’d met were signposts to much deeper wells of loathing” (167). Even worse, it becomes apparent, during an argument, that Nigel shares his mother’s ingrained prejudice, leaving Karabo “bewildered and exhausted, like a fish twitching feebly on the cold floor of his prejudice. Now all she wanted was to go home” (195). She subsequently flees to Ghana, a place she has always imagined as her true home.

André Potgieter is similarly demeaned by Mrs Summerscales. Approached to find a buyer for her valuable violin, André had seized the chance to play the precious Guadagnini. The ecstasy of the musical experience triggered his synaesthesia and a visitation by angels. Thus, when the violin is stolen and all the clues indicate that it has been taken to Ghana, André, in his desperation to once again experience such bliss, follows Mrs Summerscales’s imperious demands that he travels to Ghana to retrieve it: “Mr Potgieter [André] is an African. He’ll find his way around […]” (205).

And, in Nsawam, he does indeed ‘find his way around’. But not only does André find his way around the Ghanaian city, he additionally finds a sense of self previously elusive. His courage has been bolstered by his urgent need to retrieve and play the violin again, which aids his ability to navigate a corrupt and chaotic prison system. This success, in turn, brings fresh confidence to André. Furthermore, with his earlier dream denuded (the dream that England would be his ‘true home’), now having returned to the African continent, albeit to a different country, a new optimism gains traction for him and a pan-African sense of identity emerges.

Karabo’s earlier visions of home dissipate, too, when she arrives in Ghana. The reality of her father’s home in Ghana contrasts starkly with what she had anticipated so that she is forced to contemplate her identity without utopian flights of fancy. Despite the profound shifts of consciousness depicted in this section of the novel, though, the narrative tone here borders on the farcical: both André and Karabo, following a bizarre turn of events, clash with police and prison officials as they trail the violin, a catalyst in both their lives. The novel, having followed a chain of events started in Mthatha, culminates gloriously at a Ghanaian prison where the country’s president, together with the entire prison population, witness André’s rapturous recital on the Guadagnini violin.

The violin provides the narrative link in Yellowbone: between André and Karabo and, later, between them and the prison chief and the entire audience at the prison recital. Initially, it is the violin as a physical object, a valuable cultural artefact, that is of common interest to the people in this story. Ultimately, though, it is the music that is created with the violin that provides a meaningful emotional and spiritual connection.

Mrs Summerscales’s impulse to hoard the valuable artefact as a commercial commodity is at odds with André Potgieter’s instinct to enjoy the beauty and pleasure that it enables. The return of André’s angels, as he plays at the prison concert, together with the embrace each audience member receives from their respective guardian angels (as Karabo witnesses in her moment of ecstasy), is a powerful – albeit whimsical – image of pure pleasure shared.

While the title of this novel, Yellowbone, hints at a focus on one character and at a core concern with an individual, inward-looking, and isolated gaze, that is a starting point only. Rather, Yellowbone is a fine example of South/African literature that opens its reach to look further afield for truth and meaning, before returning to a broadened African context for a sense of satisfaction and of renewed hope in the future.

This book review was published in: Africa Book Link, Spring 2020

Outside the Lines | A Review by Aneesha Puri
Scroll to top