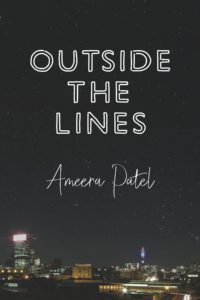 Ameera Patel’s Outside the Lines, situated in contemporary Johannesburg, South Africa is a raw depiction of the intermeshed nature of political and personal realities and the human connections, dreams, aspirations of choice and self-alienation that exist in their gaps and fissures. The author dexterously manages a seamless storytelling experience despite the ever-shifting narrative voices that flit between the consciousness of five characters from three different races, each having their own religious affiliations and emotional baggages that constitute their psychological interiority.

Cathleen Joseph is an embodiment of the typical, white teenage angst that one has come to identify with the iconic representation of Holden Caulfield in J.D. Salinger’s The Catcher in the Rye. This is delineated right in the beginning of the novel when Cathleen surveys a bar and the narrative voice nonchalantly remarks, “The girls in line are all dressed the same. They’re everything that’s wrong with the world. Identical and scratching away at their individuality to become one pus-filled blob.”

On the other hand, Cathleen’s nuanced character portrayal and her bone-chilling encounter with the world of crime, courtesy of her drug addiction, become a commentary on her father, Frank Joseph’s, inadequate parenting and the dysfunctional family dynamics that they find themselves in after the loss of Cathleen’s mother and their deteriorating financial circumstances.

Flora, the Zulu maid of the Josephs, is a finely etched character who finds herself straddling the choices she has made and the ones that have been denied to her owing to her race, class and gender. Her attraction to the newly recruited, mute painter Runyararo, often compels her to re-assess her disempowered status as the single mother of a teenage boy, while inhabiting a small room filled with Josephs’ castoffs in a deserted corner of their house.

Runyararo, who has recently arrived at Johannesburg from Zimbabwe to find work and send money to his family back home, is representative of immigrant marginalization. Occupying the lowest social rung renders him susceptible to exploitation in a society where the gap between the haves and the have nots is openly brazen.

Farhana, an Indian Muslim girl whose romantic involvement with Flora’s son Zilindile results in pre-marital pregnancy, struggles to mentally and emotionally liberate herself from the reins of patriarchal tutelage as she embarks on a future ridden with uncertainties.

Lies, subterfuge and a sheer stroke of bad luck, inextricably intertwine these five lives, leaving the characters to make sense of a reality that is slowly slipping out of  their hands, one moment at a time.

Representing inter-racial and cross-cultural relationships, this genre-agnostic novel is an amalgamation of dark comedy, domestic saga, and crime thriller. It deploys the lens of intersectionality to explore the vulnerability of each character as their everyday lives unwittingly become fraught with crime, leading to an emotional paralysis they are not equipped to handle. Apart from rare moments of reverie, a sense of tragic inevitability hovers over the universe of the novel.

All the characters seem to be caught in an uncomfortable zone characterized by indecisiveness and yearning for oblivion. Patel’s middle-aged characters – Frank Joseph, Flora, and Farhana’s mother, Mrs. Bhamjee – are single parents, and find themselves trapped between the clashing cultures and alternating perspectives created by changes in their financial states and geographical relocations.

The exigencies of living compel them to travel to unchartered domains in an era where there is a constant battle between cultural standardization and heterogenization. They are expected to carry the burden of this disharmony as they try to grapple with newly available opportunities, while the traditional hierarchies of class, gender and race lurk in the background and manifest themselves in insidious forms.

Their children, Cathleen, Zilindile and Farhana, are partly haunted by the choices of their parents and seem to be claustrophobically stuck in a never-ending cycle of repression, both as perpetrators and victims. For all their purgatorial experiences, there is a conspicuous lack of self-awareness and failure to confront the crisis at hand.

Given the predetermined nature of the novel’s universe and the pessimistic tenor of the narrative voices, it is not surprising that the novel ends as it begins, with the protagonists’ failure to probe deeper into the overwhelming chaos or their persistent and almost unconscious desire to latch onto the current state of affairs.

Patel refrains from maudlinism and the characters’ tragic trajectories are represented in a visceral manner without any attempt to poeticize or render their grief aesthetically appetizing for easy consumption. In fact, baser human instincts and cruder impulses are vividly portrayed in the storyline, which not only adds to the verisimilitude of the narrative, but makes it blatant that there will not be an easy, cathartic exit for readers after finishing the novel. These characters will live on and take a life of their own in readers’ minds.

(This review was originally published on The Mantle platform, September 2, 2020)