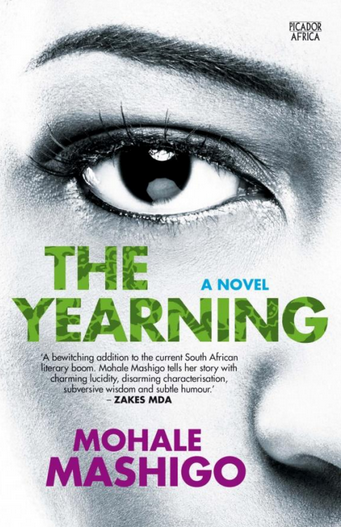 “The Yearning never stops till we embrace everything that brought us here. In our quiet denial, The Yearning devours us,” explains the narrator and protagonist at the beginning of Mohale Mashigo’s novel, The Yearning (2016). Marubini Khumalo tells the story of how she comes to learn about the secrets of her own past in order to embrace a deeper meaning of life. It is a tale of trauma revisited, not only her own trauma, but also that of her family and her community.

‘Yearning’— with a capital ‘Y’— is central to Marubini’s tale. Yet the nature and object of these feelings of longing are not explained at the outset, and she, herself, is initially unaware that there are hidden desires and traumas submerged in the deep recesses of her psyche. However, within the 185 pages of the novel, which is divided into five sections, Mashigo, the author, systematically introduces the protagonist’s latent longings, searches for their origins, and proposes their satisfying resolution.

Marubini appears to be a thoroughly modern and emancipated, 21st century South African woman: successful in her marketing career, confident in her sexuality and her relationship, and happy in her friendships, she is enjoying life. Until uncanny experiences begin to unsettle and disrupt her contentment. A series of strange events begins with the glimpse of something not-quite-seen out of the corner of her eye as she works quietly at home one evening, a dark and ominous presence that threatens her equilibrium and has her questioning her sanity. As these episodes become more persistent it is impossible to brush them aside merely as symptoms of work related stress.

On one occasion a particularly menacing visitation manifests in a seizure that renders Marubini unconscious for two days. She wakes with bandaged wrists, unable to explain the cause of the lacerations — attempted suicide is suspected — and her family and friends become wary of her mental state. Here, the author skillfully depicts the feelings of isolation that compound the suffering of those with mental ill health, and their need for meaningful engagement and empathy. Mashigo furthermore explores the relationship between psychiatry and spirituality. Despite (or perhaps because of) the intervention of a psychiatrist, Marubini’s strange experiences persist, prompting a process of determined questioning about the past that leaves her emotionally exposed and vulnerable. The juxtapositioning of strength and vulnerability is foreshadowed by the book’s striking cover design: it bears the image of a woman’s eye staring directly at the camera with a steadfast, determined gaze that, simultaneously, renders her vulnerable.

Ultimately, the protagonist has no choice but to explore her past.  As the voices in her head prompt fractured but insistent memories, Marubini visits her childhood home in Johannesburg asking the questions that have thus far been avoided. Questions, for example, about her father’s sudden death.  As she moves physically between Cape Town and Johannesburg in the narrative present, she also imaginatively revisits these same places at an earlier time: she remembers walking the streets of Johannesburg with her father, for example, listening to her grandfather’s stories on the verandah of their house, and participating in a traditional rite of passage into womanhood at her maternal grandmother’s rural village home in the north of South Africa. Most importantly, she remembers — now, more vividly — her father’s and paternal grandmother’s practices as traditional spiritual healers (known locally as sangoma). Finally, it is with her much younger brother, Simphiwe, that Marubini finds a resonating understanding. A talented artist, he uncannily captures the images of Marubini’s dreams, nightmares, and visions in his drawings.

In this exploration of ancient spirituality and African tradition, then, the author raises the question of how profound practices are to be incorporated into African life in the 21st century. The novel presents an entanglement of spirituality and political affinity, and of traditional and modern practices, and highlights the questions and responses prompted by the cultural overlapping and integration of blended South African communities. These are the issues that Marubini grapples within a narrative that progresses from a prologue, ‘The Yearning’, through four chapters — ‘The Name’, ‘The Father’, ‘The Son’ and ‘The Holy Spirit’ — and ends with a suitably titled concluding epilogue, ‘Amen’, which indicates an embrace of ‘everything that brought us here’.

Gradually, by recognizing ancient spiritual and traditional practices, together with modern psychotherapy and family counsel, Marubini is able to ‘embrace everything that brought [us/her] here’.  She is able, as a consequence, to face the unresolved traumas of her past; and, because there is no longer a ‘quiet denial’, the feelings of yearning cannot ‘devour’ her or dominate her life.

The Yearning examines profound themes and its subject matter may appear dark at times, but it is by no means a sombre read as the author has employed an accessible and enjoyable tone. The contemporary setting and characters are carefully rendered and recognizable, which is enhanced by the natural dialogue. The more serious concerns of the narrative are offset by the normal concerns of a modern young woman, including platonic and romantic relationships, sex (here Mashigo has a deft touch), and the politics of family gatherings. The pacing of the action is consistent and there is a steady intensity to the introduction and processing of traumatic memories, leading to a satisfying conclusion. The Yearning is a well-balanced and thoughtful novel.