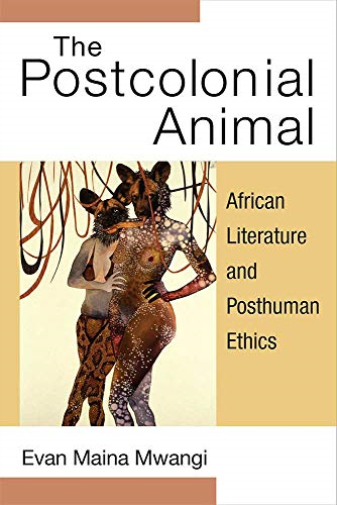 In his new book, The Postcolonial Animal, Evan Mwangi studies the role of animals in contemporary postcolonial African literature. His aim is not to explore the way in which animals are used to represent human society, but rather more to show ‘how the animal shapes texts’ (vii), leading to a reframing of the human category. Mwangi does so from an interdisciplinary and a radical intersectional approach. In other words, he does not isolate animal studies, precisely because doing so would appear ‘to play down the problems African human populations have suffered under slavery, colonialism, and neocolonialism’ (25). So Mwangi does not accept the idea of a kind of ‘order of oppression’ (first colonized, then women, then animals…), but views these modes of oppression as interlocked, as intersecting and mutually constitutive systems of marginalization.

In this Mwangi is explicitly engaged with a ‘posthuman ethics’: his vision is that in the Anthropocene – defined as ‘the era that began when humans developed capabilities to alter geologically significant conditions and processes’ (19) – humans should take up the responsibility for the devastation they caused. At the same time, he is not sticking to ‘unnecessary binaries between humans and animals’ (ibid.). Writing from a personal interest as a vegan, his concern about meat-eating and the killing of animals is reflected in the book. On the one hand, the author is not all too radical in this, susceptible to African criticisms of the animal welfare movement as at best a Western elite affair, and at worst a racist discourse and practice that privileges animals over black fellow humans. And Mwangi is also aware of the limits of his own position; as he writes: ‘I am part of the system I am trying to replace’ (184). On the other hand, at times the vegan interpretation is taken somewhat too far. Thus Mwangi proposes to view the animal metaphors of the Swahili poet Haji Gora Haji not only as a means to criticise the greediness of the postcolonial elite, but also as a way ‘to promote vegan practices’, because a cat is advised not to steal vitoweo, a word denoting relish, side-dishes, and condiment (130). In this case, the vegan argument remains unclear and therefore appears as far-fetched to the reader.

Although the book brings together postcolonialism and posthumanism, it starts with a chapter entitled ‘Precolonial Ecological Practices’ in Africa. In this chapter, the author offers a critical assessment of the philosophical ideas of Ubuntu, seen as ‘creating a connection between each human and a broader affective ecosystem (34), but it is not clear in how far these ideas have developed as a postcolonial critique rather than actually forming part of Africa’s precolonial history. A similar remark can be made on the next chapter dealing with oral literature. As this mainly forms a reinterpretation of several children’s books (and, interestingly, Jomo Kenyatta’s Facing Mount Kenya), it is questionable in how far oral genres really form the basis of the chapter. While such choices may be defendable, the author does not sufficiently explain them. This also holds for the analysis of Black Midas, a novel by the Guyanese author Jan Carew. A brief remark is made about this: it is included mainly because the protagonist relates to his ‘African ancestry’ (176), but the analysis is in the end tied to the Guyanese landscapes and environment of the novel. Especially as some of the themes that are mentioned by Mwangi warrant more attention, it may have been better to keep the focus within the field of postcolonial African literature.

The author repeatedly warns against an image of the ‘noble savage’, holding that ‘attempts to recover a pure past also assume that precolonial African societies were static and perfect’ (49 (quote), also: 30-31, 51). With some statements about precolonial African ethics, however, the author hardly pays heed to his own warning. Thus, in Mwangi’s view, Kamba men could never have enjoyed hunting in the way Ernest Hemingway described it, unless Hemingway ‘had managed to co-opt some wayward locals in practices that would traditionally have been sanctioned against within the culture’ (48-49), implying a harmonious precolonial ethics ánd of all precolonial Africans always acting in line with these.

Despite these points to critique, Mwangi’s book is commendable for being innovative, creative, and thought-provoking. The analyses range from dogs to insects to whales, and offer insight into racism, sexuality, the postcolonial condition, queerness, and human-non-human relations. Given the author’s Kenyan background, it is logical that some East African examples are given, but the book also includes examples from South Africa, the Négritude movement, Cameroon, Nigeria, and other regions.

The text has some typos (e.g.: ‘Roach’ (Instead of Rouch, 101) and ‘postapatheid’ (156), and minor mistakes (e.g. translating the title of Pepetela’s O cão e os Caluandas (spelled without tilde) as The Dog in Luanda), but this does not diminish the highly readable writing style. All in all, this book is of interest for all those involved in postcolonial African literatures, ecocriticism, and the posthuman turn.