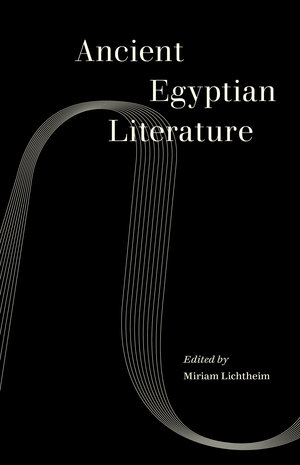 Who was the imagined readership of the pyramid and coffin texts? Did ancient Egyptians carve their autobiographies in the tombs for the living or the dead? What does their papyri poetry tell us about their society, can their sarcophagi stories compare to diary writing? What is missing in the writing that is useful to the ur-text debate?

Lichtheim’s magnificent work raises many questions and unearths 13 genres, with more to be spotted. Hopefully the University of California Press will market this work beyond the tested Egyptian history and literature courses for which the 1973 and subsequent editions were prescribed. This reprint, which combines the three ealier volumes, retains the 2005 forewords by Antonio Loprieno (Vol 1), Hans-W. Fischer-Elfert (Vol 2) and J. G. Manning (Vol 3).

Ancient Egyptian literature – mortuary literature from the pyramids and coffins – brings thoroughly modern concepts. California University is not short of literary theorists to package these with brand new textual insights in shouts on the cover and updated introductions. The Press could remarket the book for media and genre studies, African and English literature courses, overhaul it for general audiences.

Probably every lay person’s idea of Egyptian writing is hieroglyphics: animals and beetles, eyes and people. Less is known of Egyptian cursive writing on the tombs, coffins, stela, and papyri. Lichtheim worked with translations by various scholars of hieratic cursive writing from the First Dynasty to demotic in the later period.

Lichtheim’s preface, dated 1971, noted that ancient literatures have purpose, determination of which helps identify the age of the text – to commemorate, instruct, exhort, celebrate, and lament (p4). I’m sure she would enjoy a challenge if she were still alive since some of this literature appears to be for pure entertainment.

She looked at what she called ‘works of the imagination’ ranging from 3000 BC to AD 395 in the three combined volumes. All have in common inscriptions, instructions, spells, hymns and prayers, autobiography and fictional genres, written in prose, poetry and a mixture of both.

Volume 1 deals with the Old Kingdom (3000 BC – 2135), the transition to the Middle Kingdom (2135 – 2040 BC) and the Middle Kingdom (2040 – 1650). Here Lichtheim documented changes in inscriptions in the private Old Kingdom tombs. The dead arrived in their resting places with lists of foods, medicines and materials and of celebrations they wanted observed, like this example from Princess Ni-Sedjer-Kai:
‘May offerings be given her on the New Year’s feast, the Thoth feast, the First-of-the-Year feast, the wag-feast, the Sokar feast, the Great Flame feast, the Brazier feast
the Procession-of-Min feast, the monthly sadj-feast, the Beginning-of-the-Month feast, the Beginning-of-the-Half-Month feast, every feast, every day, to the royal daughter, the royal ornament, Ni-sedjer-kai.’ [Fifth Dynasty] (p48)

Alongside such a list, another list spelt out the deceased’s position in society, ancestry and worth. Shrewd poets – date of interventions uncertain – replaced these lists with the more fashionable and shorter Prayers for Offerings or simply Offerings.
Writers tweaked details of the dead’s ranks and titles and another tomb-text genre took off – the narcissistic autobiography. It stayed in vogue for the next two millennia. An example from Weni’s autobiography (indeed, hagiography since a ghost-writer from the Sixth Dynasty penned it) shows the mix of poetry and prose:

Loprieno, in his foreword, delightfully describes this literary style: ‘If prose is to poetry as walking is to dancing, the intermediate style may be compared to the formal parade step.’ (p41)

Middle Kingdom inscriptions and autobiographies are triumphalist. Ancient Egyptians would be snug in today’s celebrity culture and easily sell themselves on social media. Take Priest Horemkhauf’s Stela, circa 1650 BC: ‘I, an excellent dignitary on earth, shall be an excellent spirit (‘akh’) in the necropolis, since I have given bread to the hungry, clothes to the naked, and have nourished my brothers…’ (p172)

On to another genre from the Sixth Dynasty: The Pyramid Texts. Kings believed they would resurrect after they died, journey peacefully through the afterlife and then join the company of gods. The Pyramid texts contain glowing references to various nobles’ competencies and deeds. This leader is brave in battle. This mayor provided grain during famine. This king is a good negotiator. Of what relevance are these texts today? Well, such themes still run through modern African oral tradition and are carried forward by griots. In South Africa before a African leader begins a speech at a traditional gathering or parliament, a praise singer runs ahead of him boasting – in one of the country’s eleven languages – of the leader’s background, his ancestors and his bravery as perhaps, a freedom fighter in the struggle. Praise singers hail the current President Cyril Ramaphosa’s negotiating skills as a former trade unionist.

Another major literary genre (Old and Middle Kingdoms) comes from the Instructions in Wisdom, or simply Instructions, which Lichtheim called ‘Didactic literature’ – ‘how to’ poems of advice about living the best life, behaviour in marriage, rules of common decency, respect for elders and prayer. In these lines from Ptahhotep’s instruction to his son (late Sixth Dynasty), I have noted a similar tone to modern ‘advice’ poems like Max Ehrmann’s Desiderata (1927):
‘If you are a man who leads
Listen calmly to the speech of one who pleads
Don’t stop him from purging his body
Of that which he planned to tell
A man in distress wants to pour out his heart …’ (Verse 17, p103)

Like the Instruction to Merikare (late Eighteenth Dynasty) Lichtheim regarded this as Pseudepigrapha and the emergence of a new genre (p136). She considered pseudepigrapha ‘propagandistic works composed by priests disguised as royal inscriptions of much earlier times, the pur­pose of the disguise being to enhance their authority.’ (p691)

Much Middle Kingdom’s didactic literature was written, she said, on the theme of ‘national distress’. In an Instruction a king advises his son that the threat of assassination is ever-present; a man complains that his ba, (life force) wants to abandon him because the man is suicidal, and there is a fascinating prophesy, The Complaints of Khakheperre-Sonb, written between 1897 – 1878 BC.

‘Had I unknown phrases,
Sayings that are strange,
Novel, untried words,
Free of repetition;
Not transmitted sayings,
Spoken by the ancestors!
I wring out my body of what it holds,
In releasing all my words;
For what was said is repetition,
When what was said is said.
Ancestor’s words are nothing to boast of,
They are found by those who come after.’ (p189)

Lichtheim did not analyse this first stanza. Her interpretation began in later verses, wherein lay the theme of anarchy and dis­tress. Today’s African literature scholars might well read the first verse as indication that shamanic practices were in place in Ancient Egypt. Ancestors give advice or predictions to the living sometimes through strange languages while an individual is in trance state.

If as Aristotle taught there are a limited number of plots, then the fiction yielded in the coffin literature will delight story lovers. My observation is that The Eloquent Peasant is precursor to Scheherazade. The fast-talking peasant with the smooth lines keeps a high steward sufficiently entertained, in episodes, to avoid severe punishment.

In the Tale of the Shipwrecked Sailor a stranded man strikes up a conversation with a philosophical, rich and lonely snake on an island. The sailor makes extravagant promises in exchange for the snake’s help. The cynical snake advises him not to make promises and provides a boat and gifts. The sailor returns home, presents the gifts to his king and later muses: ‘Who would give water at dawn to a goose that will be slaughtered in the morning?’ (p264) I imagine this as the messages recaptured centuries later in both ‘quest’ and ‘Beauty and the Beast’ stories. Imagine Voyage and return meets The Frog Prince.

A Nineteenth Dynasty wit delivers satire on a graveyard papyrus. How unhappy are all tradesmen. Carpenters, jewellery-makers and fishermen are miserable. The only worthwhile profession is ‘a scribe’ who is his own boss. (p236).

Lichtheim in her 1974 introduction to the volume said the textual output in the New Kingdom was greater than that in the Old and Middle Kingdoms. She subdivided Egyptian poetry into ‘hymnic, lyric, didactic, and narrative.’ (p315).

She revealed the first example of a narrative epic poem in the canon and argued that the hymns in this era broke new ground stylistically. (p312)

By now the ancients had rewritten and edited coffin texts into chapters and we find them reworked and transformed into The Book of the Dead which now appears in verse in papyrus scrolls – spells and rituals to win eternal life, retain one’s head, ensure air and water, transform into a falcon and judgments from the gods.

Writers continue to sing their own praises in Twentieth Dynasty papyri explaining a school system teaching young boys to become professional scribes. (p497) A scribe’s ‘advice to an unwilling pupil’: ‘You are worse than the desert antelope that lives by running. It spends no day in plowing. Never at all does it tread on the threshing-floor. It lives on the oxen’s labor, without entering among them. But though I spend the day telling you “Write,” it seems like a plague to you. Writing is very pleasant!’ (p500) ‘Be a scribe! Your body will be sleek; your hand will be soft. You will not flicker like a flame … For there is not the bone of a man in you.’ (p501)

The New Kingdom yielded well-crafted love poems, for example:
‘The voice of the wild goose shrills,
It is caught by its bait;
My love of you pervades me,
I cannot loosen it.
I shall retrieve my nets,
But what do I tell my mother,
To whom I go daily,
Laden with bird catch?
I have spread no snares today,
I am caught in my love of you!’ (p523)

I would classify another genre as a Morality tale though Lichtheim simply calls it a tale. The two brothers does not end well for the woman who tries to seduce her husband’s younger brother, or for the brothers driven to evil actions. (p547)

If this part of the review seems shorter than that of Volume I and II it is partly because the style of the texts in the first half of the section continue in exactly the tradition of Volumes I and II with autobiograhies, hymns and prayers.
For this reason it is not as exciting as the second part of the volume.

JG Manning states in his foreword to the 2006 edition (dated 2005, and reprinted here) that nearly all of the Demotic literary texts in the second half of Volume III was derived from one region of Egypt, the Fayyum, ‘because the villages and the cemeteries in which papyri have been found were abandoned in the later Roman period, or just afterward, thus leaving thousands of texts, documents as well as literature, undisturbed.’ (p583)

Lichtheim uncovered animal fables on papyri, suggesting that the lion and mouse’s encounter in the final episode of the The Lion in Search of Man recurred in a briefer form in the Aesop’s Fables. (p765)

Modern scholars will find that Egyptian texts in the later period are less insular than those appearing earlier. Adventurers visit the underworld, writers mention Nubians (east Africans) and Assyrians (then from Mesopotamia), compare Greek and Egyptian cultures in Greco-Roman Egypt, talk of Amazons (originally from Libya) and ‘the land of the women’.

Umberto Eco, when he wrote about the ‘already said’ would have chuckled over these colourful maxims that began life in a coffin on Egyptian papyri: ‘the friend of an idiot is an idiot’; ‘A crocodile does not die of worry, it dies of hunger’ and ‘A cat that loves fruit hates him who eats it’.

Although the form of some of the coffin texts chosen for reproduction is sometimes repetitive, Lichtheim’s work is timeless and essential reading for students of African literature.

It raises many questions, is enjoyable and brings both a sense of intrigue and entertainment to a world that many might have thought closed to them – Egyptian mortuary literature.

This book review is published in: Africa Book Link, Fall 2019