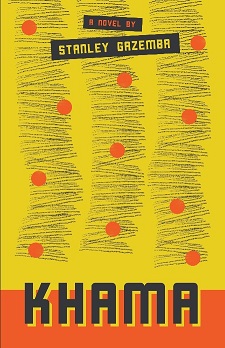 In the driest region east of the Okavango, the Amakanko live a quiet life with their cattle, their gods and their ancestors. That is until Khama’s father, the bravest hunter between the Zambesi and the Cape, is killed by an elephant. According to custom, Khama’s uncle marries his widowed mother and takes over the household. For some reason however Khama hates his uncle, and decides to rebel against him – him and everything else.

So far, this could have been just another coming of age novel. Khama’s rebellion, however, is not the revolt of an ordinary adolescent, it is the start of a new empire. Neither is the setting just another time and place, it is the early 19th century in the Northern parts of what is now South Africa. A prolonged period of drought was scorching the country at the same time as Dingane, king of the Amazulu, terrorises his neighbours, outsiders came to plunder gold and slaves, and the first light-skinned trekkers arrived in long caravans of ox-drawn carriages, in search for a new place to settle. In these chaotic times, when many tribes started to wander and were scattered in search of water, food and safety, kingdoms were destroyed, others came to life and in the end were destroyed again – or, at least, restrained.

Khama is one of those people who knows an opportunity when he sees one. The moment his father dies, he vigorously starts training his fighting and running skills. After that he goes into hiding in the hills and in a spectacular scene steals the two young people who are meant to be sacrificed to the sun-god Mlimungu before the Amakonko men start searching for greener pastures with their cattle. Apparently Khama could not have found a better way to position himself as the future leader, the one who will do everything differently. From out of nowhere, people flock to him in his hiding place in the hills, his army almost building itself.

To some of us, readers, certain questions may arise at this point. So far we have, a little puzzled, been following Khama in everything he has been doing, expecting an explanation at some point. What exactly is it that Khama is revolting against? And how is it possible that his new allies can find him in the hills, and his enemies (of which he has many) can’t? Why do these people come to follow him anyway? He did not campaign, he did not advocate his cause. The only thing he did in public, was steal the food out of the mouth of Mlimungu, which was seen as an outrage. And why did he choose to rescue these youngsters from this cruel ritual? It is not as if Khama dislikes violent methods: he has his own soldiers eaten alive by black ants for falling asleep during their night shift, not to mention the horrors his enemies have to endure. But even in the long run, this novel does not give many answers. We hardly ever get to know what Khama thinks, we only follow him in his footsteps. We witness the birth of an empire and learn a few things in the process: how to fight, how to make arms, how to catch and prepare a hippo, how to build a hut, how to drill an army and enforce loyalty, how to intimidate the enemy at the battlefield when you are a woman, what it means to be faced with a Koyoyo challenge when you are Amakonko; and most of all: how to defeat an army that is bigger than yours. Maybe Khama did not need a real reason to revolt, maybe he just needed the opportunity, as many people who lust after power do. Or maybe we readers do not need to know his reasons. We only need to know what happened.

Khama, the novel, is probably a small revolt in itself. In 2003 Stanley Gazemba won the Jomo Kenyatta Prize for Literature in Kenya with The Stone Hills of Maragoli (later republished in the United States as Forbidden Fruit). In this novel and several of his short stories he writes about life in rural Kenya and in the slums, giving voiceless people a beautiful voice in clear, fluent sentences. But Khama is different. Here Gazemba’s sentences are still beautiful and fluent, but more lofty. And where the characters in The stone hills open themselves up to us readers, so we can identify with them as we are used to, Khama and his friends seem to have another purpose.

Did Khama ever exist? Probably not. The publisher claims he is loosely based on the historical figure of Shaka, but the strange thing is that Shaka is also mentioned in the novel and Khama is very close to killing Shaka’s successor Dingane (here called Dungane) when the latter stands peeing in a nearby bush –  a deed that would certainly have changed the course of history. Actually, it does not matter whether or not he existed in real life. In an interesting ‘epilogue’ the story of how Khama’s empire came to an end, fictional or not, is integrated in the very non-fictional story of (cultural) dispossession in South Africa. This all makes sense if we perceive Khama as one of those African novels that is linked to a tradition of oral storytelling, by combining the real contemporary world and real history with myth and a fictional hero. The idea is that between the reader (or listener) and his or her perception of the world, the writer (narrator) creates a fictional hero who corresponds to history but is not history, so he can act as a metaphor that is larger than life.

As such, Khama serves as a metaphor for forgotten history. In the early nineteenth century there might have been one or two leaders who were called Khama, but it is quite a challenge to find any detailed information on them, which of course may prove every point that could be made about historical amnesia. Khama, as a novel, rebels against the historical mainstream, against ‘the historical old literature that [children had to] cram by root at the Mission School’ after Khama (or others like him) was forced to sell his land to mining companies desecrating the caves where the tombs of the Great, laden with gold, were hidden, guarded by spirits with flaming eyes – who surprised everybody by not showing their wrath. The story of Khama’s golden days, claims the narrator, could have been one of the stories that were told around campfires in the evening, ‘in the way history was written in the old days’. But alas, the empire building days were over, and there were too many other, more stunning stories to tell.