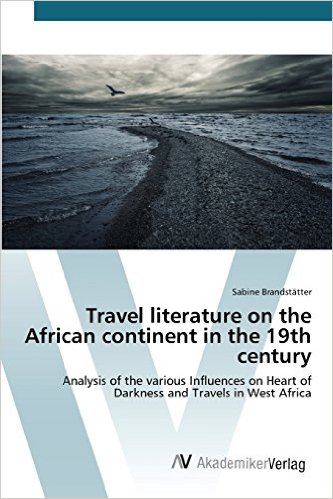 This small book concerns the author’s MA-thesis from Graz University (Austria). It discusses travel writing, with Joseph Conrad’s Heart of Darkness (1899) and Mary Kingsley’s Travels in West Africa (1897) as examples. The aim is to show how travel literature was shaped by contextual influences as well as personal experiences, and how it in turn strengthened British colonial and imperial projects.

The subsequent discussion of these books deals with aspects of narrator, speech, mode, metaphors and other features, also drawing on Conrad’s diary. These formal and structural aspects of the texts are offered separately from the books’ content, as if they are unrelated to the issues of imperialism and colonialism.

Only as of page 62 the reader learns more about the ways in which imperialism is addressed and evaluated in Heart of Darkness and Travels in West Africa. This interpretation is predominantly based on remarks about content, and framed as ‘influence’ of society on the texts. After brief remarks on gender and patriarchy, the book concludes with: ‘Travels in West Africa and Heart of Darkness are representatives of the English society’s dominant ideologies, views and values’ (p. 85).

Many critical studies have been written about Conrad and Kingsley. The author has apparently not bothered to consult these, and took to re-inventing the wheel instead. Observations – such as the allocation of speech – have all been made long ago (a good example is Chinua Achebe’s critique on Conrad from 1977) and in fact, much more refined analyses of travel literature have already been made. We need only think of the concepts ‘imperial gaze’ and ‘trope’ as developed in postcolonial studies, and successfully employed in various publications on travel literature.

Apart from these critical remarks on Brandstätter’s analysis, the publication also suffers from grammatical errors and typos. The thesis was published by Akademikerverlag, a publishing house specializing in publishing dissertations. It can only be encouraged students and junior scholars disseminate their work, and the idea of print-to-order system is fine as such. Yet, this thesis should only have been published after thorough reviewing and, in view of the quality, contents and size, it comes at a far too pricy level. Fortunately, Graz University makes the thesis available on-line for free: http://unipub.uni-graz.at/obvugrhs/content/titleinfo/239755

Sabine Brandstätter, Travel literature on the African continent in the 19th century: Analysis of the various Influences on ‘Heart of Darkness’ and ‘Travels in West Africa’ (Saarbrücken: Akademikerverlag, 2014). ISBN-10: 363972030X. Bibliography, 6 figures. 100 pp.

This book review was published in: Africa Book Link, Spring 2016

Beneath the Black Sun of Cabinda – Virginie Mouanda Kibinde | A Review...
Scroll to top