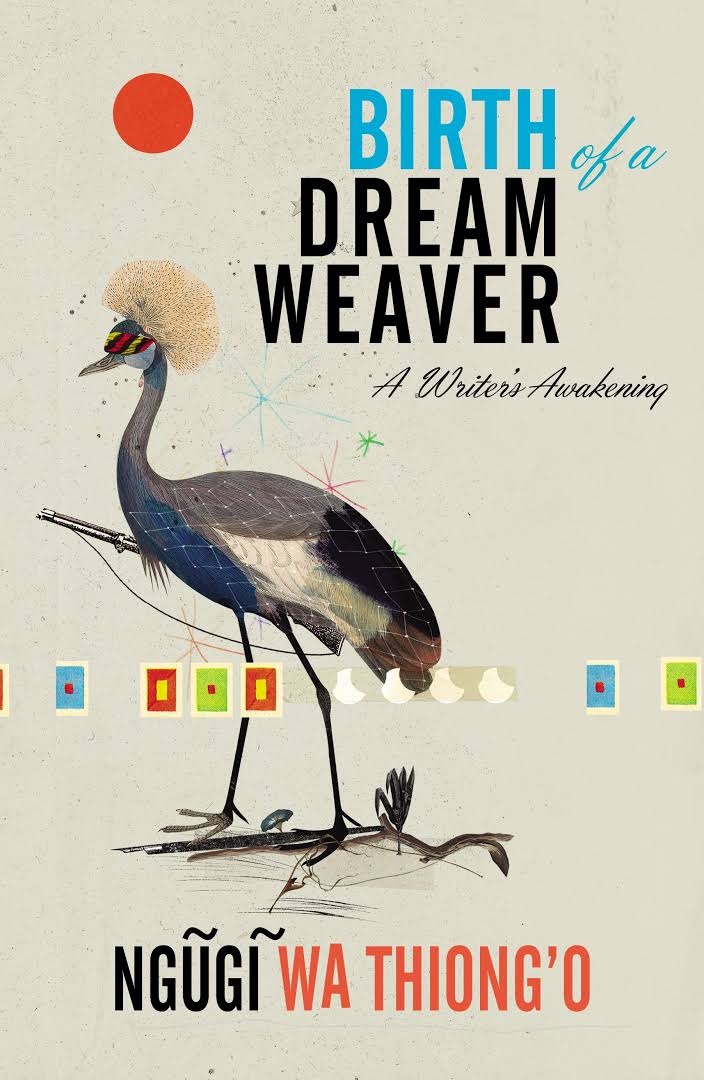 Colonialism and nationalism are big words. So big that they may become meaningless abstractions. Through telling about his personal experiences with these overarching concepts, Ngũgĩ wa Thiong’o shows what possible meanings they can acquire. In the trilogy of memoirs he wrote – Dreams in a Time of War, In the House of the Interpreter and Birth of a Dream Weaver – Ngũgĩ charts the vicissitudes of life from his birth in 1938 in a peasant homestead in Limuru, Central Kenya to his admission to Leeds University in 1964.

The first book (2010) focuses on the childhood years of the author. The main ingredients are games and story-telling; Ngũgĩ’s siblings, the wives of his father and his mother’s decision to divorce; the tensions between colonial/missionary schools and local culture; and the start of the war for independence in Kenya in the 1950s.

In the House of the Interpreter (2012) tells about Ngũgĩ’s time at the prestigious Alliance High School as a teenager. In the meantime the war is a full-blown reality and the safety of the homestead is brutally destroyed as the village is razed to the ground, one his half-brothers killed, another brother fights in the forests, is then captured and detained, and his mother spends time in prison. Despite these troubling times, the young Ngũgĩ manages to pursue his education and is eventually admitted to Makerere University in Uganda.

This is where Birth of a Dream Weaver starts. Many young intellectuals from all over East Africa find themselves at Makerere in the early 1960s and already for this reason the book is an interesting read. The climate in which this important generation of African writers is formed is vividly described. We learn about Ngũgĩ’s first meetings with writers, like Peter Nazareth and Jonathan Kariara, and future politicians like Benjamin Mkapa (third President of Tanzania), and how he enters the realm of the important African literary magazines like Penpoint and Transition. Ngũgĩ receives an invitation for the famous First International Conference of Writers of English Expression in 1962, where he finds himself “among the big names of the time”: Ezekiel Mphahlele, Bloke Modisane, Wole Soyinka, Chinua Achebe, Langston Hughes, etc. It is here that the debates take place that so much mark Ngũgĩ’s later career and his eventual choice to write in his native Gĩkũyũ.

Nobody is, of course, born a writer. Yet, already as a child in Dreams in a Time of War, Ngũgĩ’s love of performance and reading became apparent, and this has clearly not diminished in Birth of a Dream Weaver. The young James Ngugi, as he is then called, writes a play for the University interhall English competition, and thrills at the publication of his short story – The Fig Tree – in Penpoint in 1960. He describes how he takes a bus to Nairobi to personally deliver his first novel manuscript to the East African Literature Bureau, and the changes of its title from “Wrestling with God” to “The Black Messiah”, to be published in the end as The River Between. The first performance of his three-act play The Black Hermit is spelled out in rich detail, while in the meantime his second novel Weep not, Child is published. Although he does himself not quite understand why, he leaves his career as a journalist with Kenya’s largest newspaper The Daily Nation. He wants to weave dreams and be a writer.

All this is set against the background of friendly competition between the different Halls of Makerere University, the cockiness of the students shouting “Uncle!” at the Student Guild assemblies, not realizing they are referring to the French “Encore!” (154), and the encounters between students and staff at Makerere.

But this book would not be Ngũgĩ’s, if not politics played a major part in it. We learn about the differences in political history between Uganda and the settler colony of Kenya, and of the various resistance movements that confronted the colonial system. Of course, the so-called Mau Mau – “called by its rightful name, Land and Freedom Army” (ix) – receives ample attention, but as a Kenyan in Uganda Ngũgĩ wa Thiong’o broadens the scope to include politics at a world level, discussing colonialism and racism in history.

For Ngũgĩ, politics is not a matter beyond himself and his activities; it directly impinges on him. Thus Birth of a dream weaver starts with the story of how Ngũgĩ’s prize-winning play ‘The Wound in the Heart” was refused to be performed at the Kampala National Theatre as in it it is suggested that a British officer had raped a woman during the war. “They have nothing against the play as a play, […] but they think a British officer could not do that!” (p. 4) is the explanation Ngũgĩ is offered. The author continues with narrating the Hola Massacre whereby eleven men were bludgeoned to death by British camp officers in 1959. People in Central Kenya know better than that ‘a British officer could not do that’. In the settler worldview, the lives of “the natives” are not worth mentioning, compared to animals at best.

Also in the dealings with the professors at Makerere University, race relations are a crucial factor. Some teachers indeed fulfil all the stereotypes of racist colonial attitudes, looking down on the students with patronizing condescension. Yet others prove inspiring for the young Ngũgĩ. Apart of the crucial role of his mother in pursuing his education, Ngũgĩ stresses the support of his fellow students and some of his teachers at Makerere University.

It is precisely the sense for personal detail that makes this memoir so fascinating. Instead of blanket terms and rigid categories, we get the atmosphere of the late colonial world in East Africa through daily experiences in the interactions between people. The memoir’s three broad themes – the inequalities and injustices of colonialism, the growth of a generation of African intellectuals, carrying the haunting memory of colonial violence as well as the hopes and fears for the future, and Ngũgĩ’s own start as a writer – are cleverly woven together in beautiful prose. Perhaps this will finally convince the jury to award Ngũgĩ wa Thiong’o the Nobel Prize for Literature.

Birth of a dreamweaver will be published in a Dutch translation in Fall 2017 under the title: De geboorte van een dromenwever (Amsterdam University Press)

Writing beyond borders: Kwani Trust as an ambitious African LINGO | An article...
Scroll to top