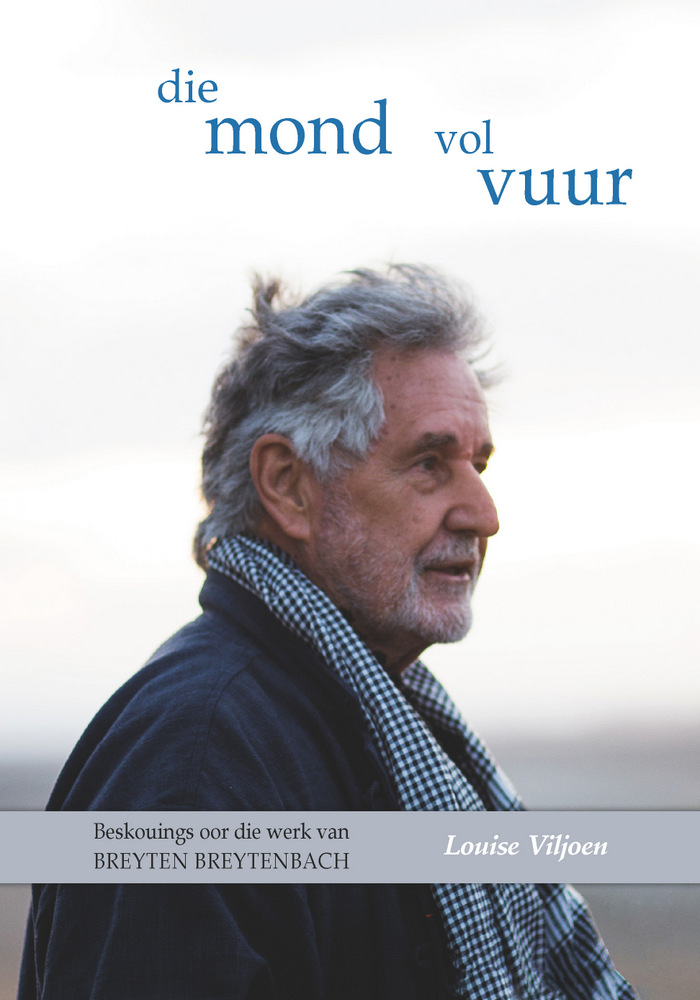 The South African poet, essayist, freedom fighter and painter Breyten Breytenbach hardly needs any introduction since he is perhaps the best-known Afrikaans poet in the world. Neither does Afrikaans literary scholar Louise Viljoen, who recently published a monograph of twelve essays on Breytenbach’s literary work – Die mond vol vuur. Beskouings oor die werk van Breyten Breytenbach (2014). Poetry has a central role in the publication, which corresponds with Breytenbach’s oeuvre, comprising more than twenty works of poetry.

The book opens with a number of essays on broader topics, an introduction of a kind. The first chapter looks at the usage of proper names, a very typical phenomenon in Breytenbach’s work. The writer himself appears in his fictional texts, often under alliterations such as Bangai Bird or Buffalo Bill, but he also uses fictional names in his real life. One example can be Christian Jean-Marc Galaska, the name on the passport with which Breytenbach entered South Africa in 1975. Then, Viljoen concentrates on biological, poetical, political and biblical father figures in his texts in chapter 2. Representation of Africa in Breytenbach’s writing is the topic of chapter 3, and the role of the reader in his works written in jail of chapter 4. After these more general chapters essays on more concrete topics or specific texts follow, such as tension between local and global identities in Dog Heart (1998), parody in the poem ballade van ontroue bemindes, the movement between inside and outside in Return to paradise (1993), or the author on stage in the dramas Boklied (1998) and Die toneelstuk (2001). There are also two chapters on Breytenbach and his work as intertext: Afrikaans poets in conversation with Breytenbach as public figure, and Afrikaans poets in conversation with Breytenbach’s poetic work. These two chapters look at Breytenbach’s role in South African society as well as in the Afrikaans literary field.

Louise Viljoen, who in 2009 had published a similar collection of essays on the work of another world-known Afrikaans poet Antjie Krog, proves to have a comprehensive knowledge of Breytenbach’s creative work. Also in case of this book, each chapter stands for a previously presented academic paper or article. The essays have however been rewritten in a lively, easy to read style and updated. While analysing a specific poem, such as ballade van ontroue bemindes in chapter 5, or a more general topic, such as the usage of personal names in the first chapter, Viljoen always succeeds in identifying typical traits and themes in Breytenbach’s writing. The twelve chapters cover analyses of selected works, contextualize the creative process, and look at the reception of Breytenbach’s writing within the specific socio-cultural circumstances of South Africa. Viljoen displays theoretical knowledge ranging from Freud and Sankar to Ingarden, which she applies meticulously to the contextual analysis of Breytenbach’s oeuvre as a whole. Additionally, she uncovers unexpected connections within or outside of South African literature to explore the relevance of Breytenbach in world literature.

And yet, disregarding the complexity of discussed issues and the vast range of knowledge, the essays read very smoothly. Viljoen succeeds in producing a text accessible not exclusively to academics. The essays included in the book can be read individually, making it also perfect teaching material. When read as a whole, however, Die mond vol vuur works as a jigsaw puzzle, with each chapter bringing new, interesting insights into the creative work of Breyten Breytenbach.

The title, die mond vol vuur (the mouth full of fire), captures the strength of Breytenbach’s literary work, the great effect it has on its readers, and consequently on the South African literary field as such. As the two essays on reception of his work suggest we cannot forget the impact of Breytenbach’s writing on the social and political situation not only in South Africa. After all, we are speaking of an author whose work was banned by the Apartheid government, and who spent a significant amount of time in political exile and also in jail as a political prisoner. His work, however, stays relevant and keeps spreading the message of equality, democracy and freedom. Nothing Breytenbach has ever written, before or after 1994, can be thought of outside his general political conscience. As Viljoen explains in the introduction, die mond vol vuur is also a wordplay on the title of an anthology of Breytenbach’s work from 1995, Die hand vol vere (The Hand full of feathers). It is also a line in the last poem in the same anthology:

The hand full of feathers. The dog’s skin full of speed. The mouth full of fire. The heart flame full of before-time. (own translation)

This subtle wordplay is only possible thanks to a thorough knowledge of Breytenbach’s writing and an excellent ability to close-read, which we are accustomed to in Viljoen’s writing. This aesthetically pleasing publication will surely be an asset to the library of any scholar of Afrikaans literature or anyone interested in Afrikaans poetry.

This book review was published in: Africa Book Link, Spring 2016

Travel Literature on the African Continent in the 19th Century: Analysis of...
Scroll to top