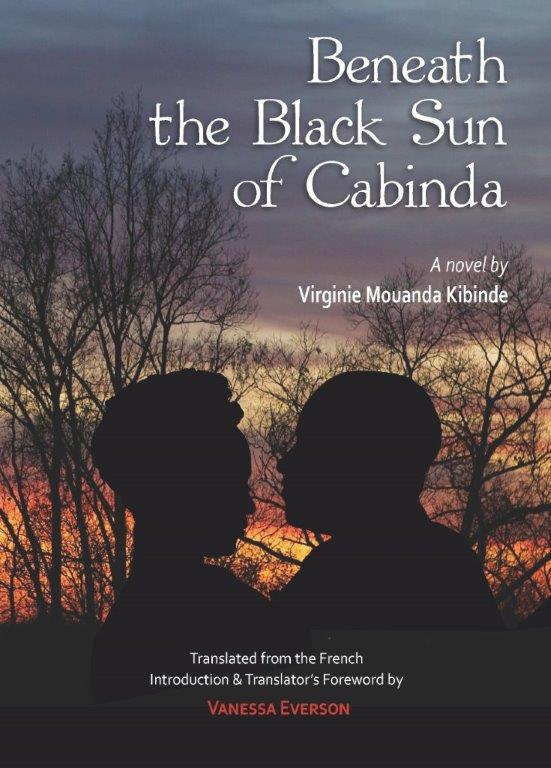 This is a translation of Virginie Mouanda Kibinde’s first novel, originally entitled Les âmes de la forêt (Souls of the forest, 2002). In a second edition of 2004 the book was renamed Au soleil noir du Cabinda. In the introduction, the translator, Vanessa Everson explains that this modification of the title frames the novel more closely to its setting in Cabinda and the tragedies of life under this ‘black sun’ as described in the novel (p. 1-4). The oil-rich enclave of Cabinda, officially a province of Angola, but separated from the rest of the country by a narrow strip of the Democratic Republic of Congo, has long been the setting of war. After the colonial war against Portugal, war broke out between the government forces of the newly independent country of Angola and the Cabindan separatist movement FLEC. Since then, more than 200.000 Cabindans have met their death at the hands of Angolan soldiers and many more have been forced to live in exile.

The novel starts in a calm African village, its couleur locale emphasized through the usage of words in the local language and references to ‘custom’. Albino, the protagonist of ‘almost twenty-one’ (p. 21), visits his grandmother who raised him after his mother’s death. Yet, underneath the quiet, we can already feel the tension: the village is populated by refugees – Angolans from Cabinda who have to live in Congo-Brazzaville because of the war. And so, the quiet village life also knows the melancholy of exile.

Soon after, Albino leaves for France on a scholarship to study medicine and visits Portugal to look for his grandfather, a Portuguese military who had been the governor of Cabinda during the colonial era. It becomes a traumatic encounter for both, and in a flashback we then learn that Albino’s grandfather had had a strong hand in the war in Cabinda, the ‘Kuwait of Africa’, as Kibinde once called it (introduction, p. 4).

After the Portuguese had left in panic, they sold the region to the Angolan government forces, who invade Cabinda with full force soon after. These army kids who had known nothing but war and constant indoctrination of ‘Afro-Stalinist’ propaganda (p. 36) completely destroy Albino’s village, raping and murdering in the process. His mother dead, baby Albino is raised by his grandmother, and together they seek refuge in Congo-Brazzaville.

After his stay in France, Albino returns to Cabinda to search his father who has become a guerrilla in the separatist movement. He finds him, handicapped after having stepped on a landmine, but still strong-willed. Albino also finds the love of his life, the beautiful village girl Maria. Despite his love for her and his father’s wish for him to become a guerrilla, Albino returns to France to finish his studies.

A second visit to his grandfather is so unsettling that the latter realizes that his life in Portugal is even more miserable than it was in Cabinda: ‘In Cabinda, people despise me – they hate me. They’d kill me if they had the chance. That means that for them, I exist. But here, no one knows me, no one even looks at me’ (p. 75). From this negative assessment, Albino’s grandfather decides to return to Africa, even if already very old and crippled. There he is able to reach the village where his former mistress, Albino’s grandmother used to live, only to learn that she has just died and people are preparing for her funeral. He is allowed to attend the funeral, but then he is tortured by the village youth. The women of the village have pity on him and show him a path to escape, but he meets his fate by stepping on a landmine (p. 98-100).

In the meantime Albino has concluded his studies and returns to Cabinda to start a clinic in the guerrilla-controlled forests. He lives happily with his Maria, but the novel ends sadly with her death during a raid by the government forces (p. 120).

The publishing house advertises the book with the remark that ‘this novel is much more than a political tract’, but at times Beneath the black sun of Cabinda is precisely going too much in that direction. A quote like this says it all: ‘At that time, certain young African states emerging from colonial bondage adopted the Soviet Union’s totalitarian Marxist-Leninist doctrine, which in Africa translated into scientific socialism and the one-party state. For that reason, Congo was denying even its most recent and closest historic ties to the benefit of a completely foreign and inadequate philosophy’ (p. 40). Such clumsy political jargon sharply contrasts with other sections in the novel, where the book’s language is nearly poetic and pleasant to read. For example, a mad woman wandering in the bush who had lost her children when her Portuguese patron/father took them to Portugal sings about her hope and despair: ‘The entrance to the house, the entrance to the village, the entrance to the forest/ The stranger approaches from there/ The messenger comes from there/ From afar he brings news/  Good or bad news/ Happiness or sadness in view/ As told us by the messenger from the cliffs/ Watch carefully the footprints ahead of you….’ (p. 116). Another example would be the reaction of the spirits when the deceased Maria does not want to leave her children: ‘You are in another place now; nothing is the same. When you speak, they hear only the murmur of the wind; when you move, they see only a whirlwind of sand. You aren’t with them anymore, come with us!’ (p. 120). Stylistically then, the novel can hardly be called balanced; at times it makes for tedious reading, at other instances there is rhythm in the language.

The representation of women in the novel is strongly connected to race, bordering on the old notion of Mother Africa. Thus after it is said that Albino could not help ‘pursuing’ some women in Lyon, the fact that he does not develop a longstanding relationship with any of them is explained with: ‘his multiracial fascination with women from the four corners of the earth did not make him forget Maria […] She represented the mother he had never known, and the homeland he had been deprived of from the time he was born’ (p. 80). Also on page 111 we learn about ‘the uniqueness of black women,’ and Cabinda is compared to a ‘betrothed’, having been ‘besmirched’ and then ‘tossed aside to rapists’ by the ‘groom Portugal’ (p. 35). This classic gender framework no longer ‘works’: it was a novel thought in the négritude of the 1940s, but by now sounds very much like beating a dead horse.

Kibinde portrays men and women in all their vulnerability to violence. She tells of women left behind after their Portuguese patrons have taken their children to Portugal, of rape and murder (Maria and Albino’s mother) by the government forces, and of the destructive force of landmines (Albino’s father and his grandfather). These are men and women reduced to silence (p. 37).

Albino’s indignation about all this runs deep: ‘He knew that one day he would write about it all. He would write the history of this hidden people, who had been expressly side-lined for purely economic reasons’ (p. 76). The indignation of the author, who grew up in Congo, but whose family hails from Cabinda, may run as deep, but poetics may be a more forceful way of voicing that than political argument. Especially in literature.

This book review was published in: Africa Book Link, Summer 2016